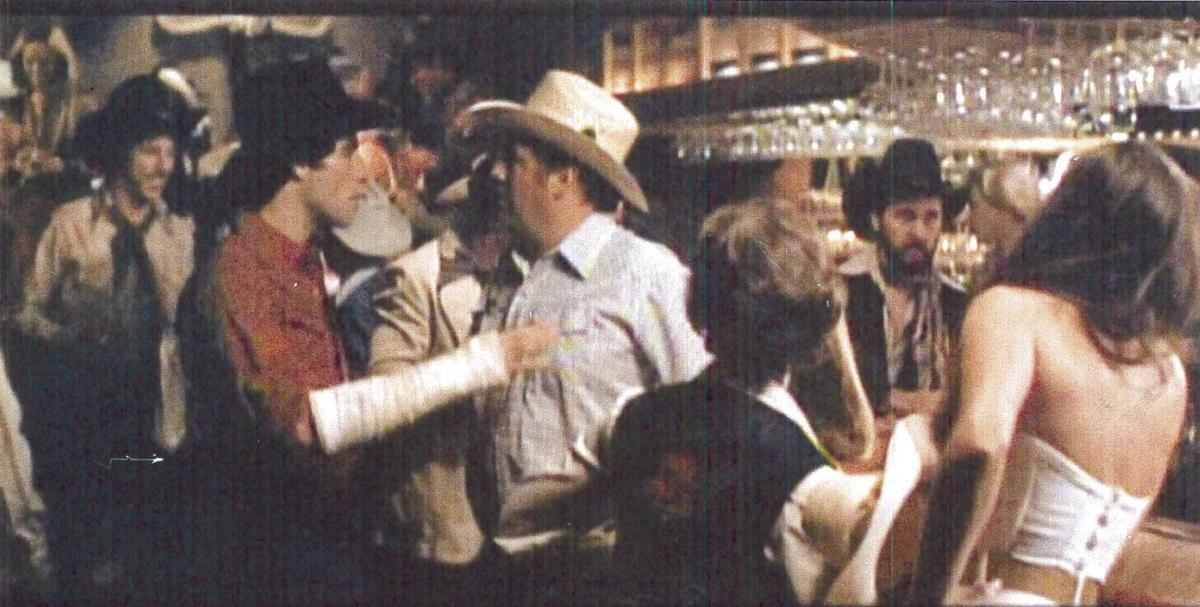 Bob Hartung, to the left behind John Travolta, has his big scene in 1980 feature film ‘Urban Cowboy’ starring Travolta. The scene is in a bar after Travolta’s character Bud has broken his arm, and he is talking to Barry Corbin, who plays Bud’s Uncle Bob in the movie. 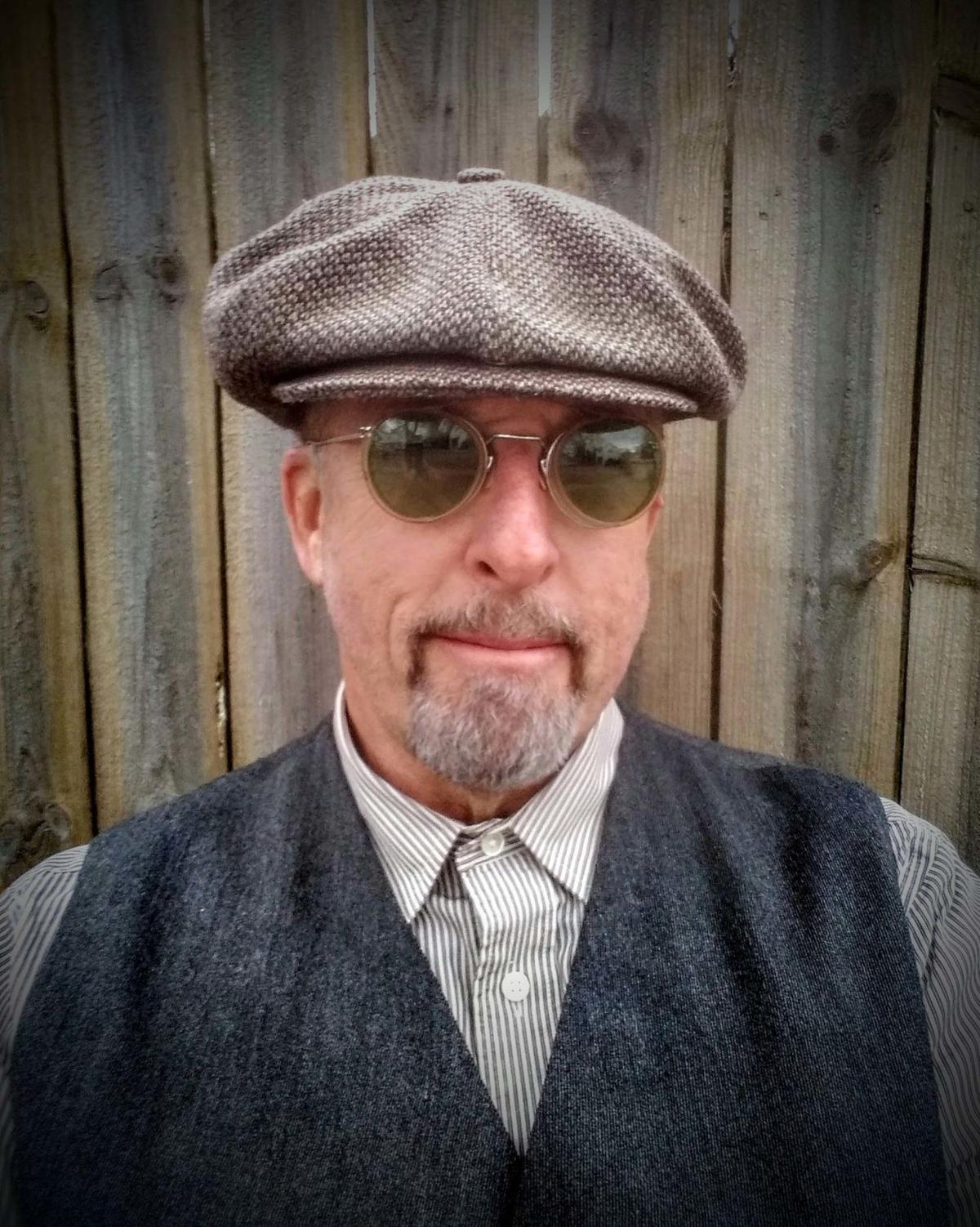 Bob Hartung, to the left behind John Travolta, has his big scene in 1980 feature film ‘Urban Cowboy’ starring Travolta. The scene is in a bar after Travolta’s character Bud has broken his arm, and he is talking to Barry Corbin, who plays Bud’s Uncle Bob in the movie.

Bob Hartung moved to Houston from the East Coast and got a job at Exxon, where his dad worked. But he was also interested in knowing a lot more about the city, the bar scene and the cowboys there. It was 40 years ago and Hartung was in his 20s. A chance meeting with an editor of a local free magazine led to an unexpected opportunity to get beyond the real Houston to the Houston of the Big Screen.

The editor told Hartung, who now lives in Winfield, that they did a story about some kind of show every month. The next one they were looking at was a story on “Urban Cowboy” that was being shot on location. Hartung, wanting to find out more about the movie and to meet John Travolta, volunteered to pass himself off as a writer for the magazine and do a story on the filming.

He went to the office Paramount Pictures had rented for their headquarters and introduced himself. A couple of days later, he got a phone call from a Paramount publicist who agreed to set up an interview with Travolta. A few days later, the publicist told Hartung Travolta wasn’t doing interviews with anybody, but if Hartung wanted, he could get him into the movie as an extra, and he could write the story from his own point of view.

Getting onto the set, getting an opportunity maybe to meet Travolta and some of the other stars was exactly what Hartung wanted.

The publicist gave him the day, time and location for him to report. The shoot was at The Cowboy Club behind Houston’s famous Galleria mall. “It was a time when discos were being replaced with cowboy bars,” Hartung said.

He had sworn he wasn’t going to be a cowboy when he went to Houston, but for his extra part, he went out and bought pants, a shirt and a neckerchief and borrowed a pair of boots from his dad. He already had a cowboy hat.

Waiting outside the set, Hartung struck up a conversation with a young woman, also an extra,  and they ended up being together as a couple out for a night at the bar during the takes. An assistant led them down some steps behind Travolta and Madolyn Smith and they stood  there for most of the time.

“You know a movie set — the wires, microphones, people, lights, cameras, a plywood runway for the camera — I was on the right side of the camera, and I didn’t know what the camera would pick up,” Hartung said.

He had “stopped” smoking in 1973, when he was 16 and smoked “only when I needed it,”  Hartung said. He’d brought two packs of Marlboros with him, and when he needed one, he’d light up. On the bar, about 10 feet from where he was standing, was an ash tray, so he eased over that way to use it. The movie crew was doing three shots on the set, and they were done many times each over four and a half or five hours. Hartung smoked a pack and a half of Marlboros in that time.

During breaks, the extras were told not to bother Travolta who was “nothing like Vinnie Barbarino” (the character Travolta played on the TV show “Welcome Back, Kotter”) but was quiet, shy and retiring, Hartung said. Travolta had also been accused of being aloof and uncooperative by newspapers. Hartung, however, wanted to know the truth for himself, and he said he didn’t want to say 25 years later that he had been in the same room with Travolta but hadn’t spoken with him.

When he had first seen him earlier in the day, Hartung said, “The odd thing was that I felt like I knew him” because he had seen his movies and thought about his work. “Of course he didn’t know me.”

Finally, a moment came when they could meet. Hartung went up to Travolta, stuck out his hand and told him he admired him as an actor. “He seemed startled,” Hartung said, but they spoke pleasantly for a few minutes.

Hartung got the pleasure extras often don’t get — about halfway through the movie, there he is on screen behind Travolta in a bar scene after Travolta’s character Bud has broken his arm. You can’t miss Hartung — he’s right up there.

Hartung had another chance to mingle with the celebrities when the movie premier was held at Gilley’s, a huge honkey-tonk bar in Pasadena, Texas, where the bar action is actually set.

“You know, some people have the time and the money just to go to events like that,” Hartung said. He got a picture of artist  Andy Warhohl and Jerry Hall, actress and ex-wife of Mick Jagger, now married to Rupert Murdoch, together at the party. Hundreds of people attended.

Hartung has a scrapbook he put together with photos, a story he wrote for a Maryland newspaper, a preliminary production document and other details from the time. He wrote that the whole day of being an extra lasted about 11 hours, but he enjoys talking about it to this day.

“I went to something fun, interesting. If you don’t interact, take advantage, you miss out.”

Hartung is now thinking about going to Pawhuska, Okla., to try to be an extra in Martin Scorsese’s film of “Killers of the Flower Moon,” about the murders of the Osage and the beginnings of the FBI in the 1920s. He’ll get clothes so he can dress like people of the time, and he’ll present himself to see if he can get a part.

“You have to do something,” he said. “I’ve learned so many things” by going after unusual experiences.