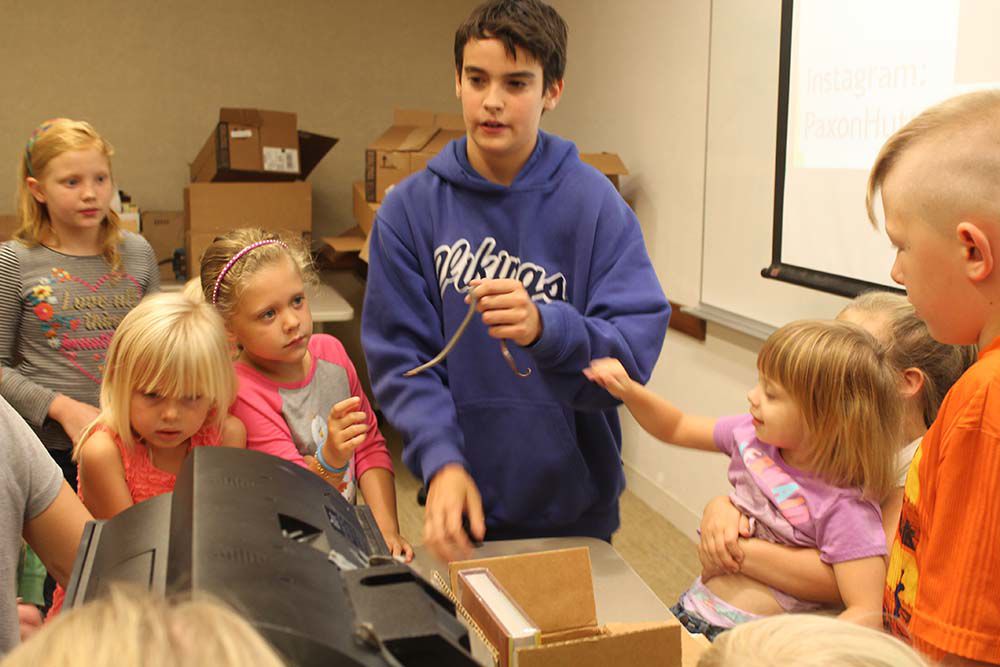 A gaggle of girls gathers round Paxton Hutto to gently pet a ringneck snake. One child, when he saw the snake’s belly, said it looked like the snake had a sunburn. 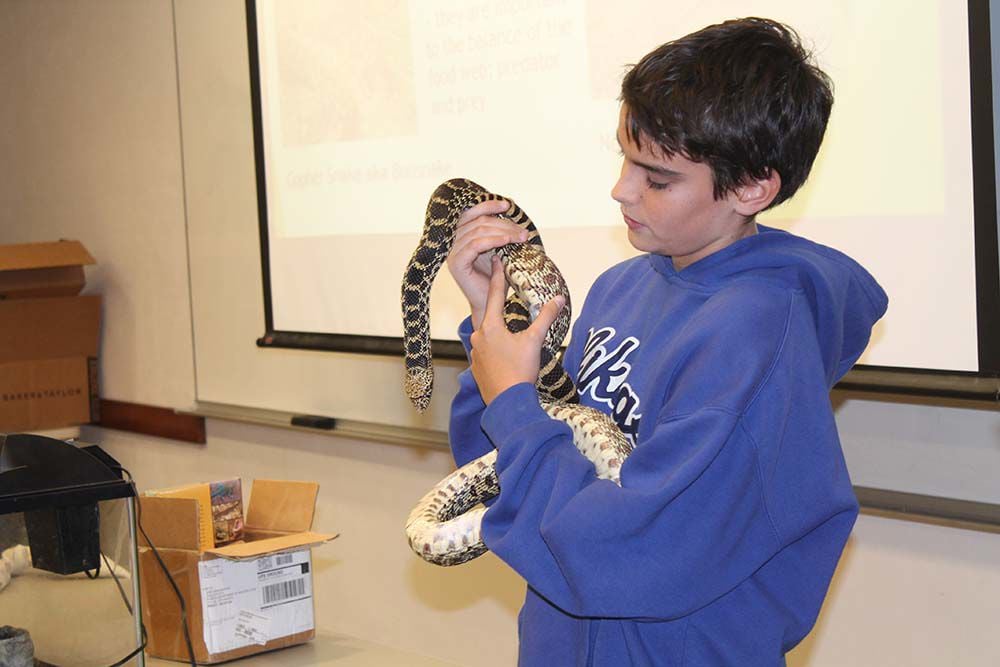 Paxton Hutto looks at the bull snake wrapping itself around his arms while Paxton talks to the audience about the snake.

A gaggle of girls gathers round Paxton Hutto to gently pet a ringneck snake. One child, when he saw the snake’s belly, said it looked like the snake had a sunburn.

Paxton Hutto looks at the bull snake wrapping itself around his arms while Paxton talks to the audience about the snake.

Snakes writhed around in Paxton Hutto’s arms and through his hands, but the middle-school student remained calm as he focused on his audience and his talk at the Winfield Public Library on Tuesday.

A group of kids and adults paid lots of attention to Paxton’s presentation, which lasted almost an hour but could have gone on longer judging from the interest of the audience.

Paxton, a Winfield eighth-grader, has been bringing frogs and snakes and other cold-blooded creatures home since he was about 2 years old. He said sometimes his parents got mad at him, but his mother, Kaitlin, loves snakes, so she said if she got upset, it was because he was making some kind of mess, not because a snake was involved.

She, like her son, learned what she knows about snakes, including to love them, from her father, Ken Brunson, a biologist. Brunson was also at the library presentation.

Paxton’s dad, Joe Hutto, is not so fond of the creatures, but he too was on hand to support his son, along with a number of other family members.

Paxton showed a several snakes to his audience and told them at the one he was holding and some general characteristics of each species.

He had five snakes with him — a large bull snake (sometimes called a gopher snake), a garter snake, a hognose snake, a ringneck snake and a western rat snake that his grandfather had just caught before the presentation. All are non-venomous.

Paxton said his favorite is the hognose snake. It is sometimes mistake for a cobra because it can inflate its neck to be hoodlike, so people end up killing it.

“A cobra in Kansas?” he said a bit scornfully.

One child asked him if the non-venomous snakes would bite and he said yes. He’s been bitten around 30 times.

Paxton has started a business to remove snakes from people’s yards and relocate them. He removed a 5-foot-long western rat snake from a garden and relocated it to a woodsy area near the Walnut River.

“Snakes don’t usually come back to the place where they are, but I want to put them someplace not too far way from where they were found and comfortable to them, or they will die,” Paxton said.

He hasn’t encountered any venomous snakes to remove so far, but he’s sure the day will come. He has the necessary snake-catching equipment, a hook and a snake bag, though he said the venomous snakes could bite a person through the bag.

Paxton said he doesn’t usually keep the snakes. He has only two now.

The children crowded around the table where Paxton held a ringneck snake for them to touch.

He also had booklets about Kansas snakes that his helpers distributed at the end of the program.

The program ran a little late, but no one was in a hurry to leave.

Children’s librarian Joanna Brazil had a large selection of books about snakes that people could look at or take out.

The next K5 Science and Nature Club presentation will be feature a wildlife rehabilitator. The program is 4:15-5 p.m. Tuesday. It is focused on kids kindergarten through fifth grade, but anyone is welcome.