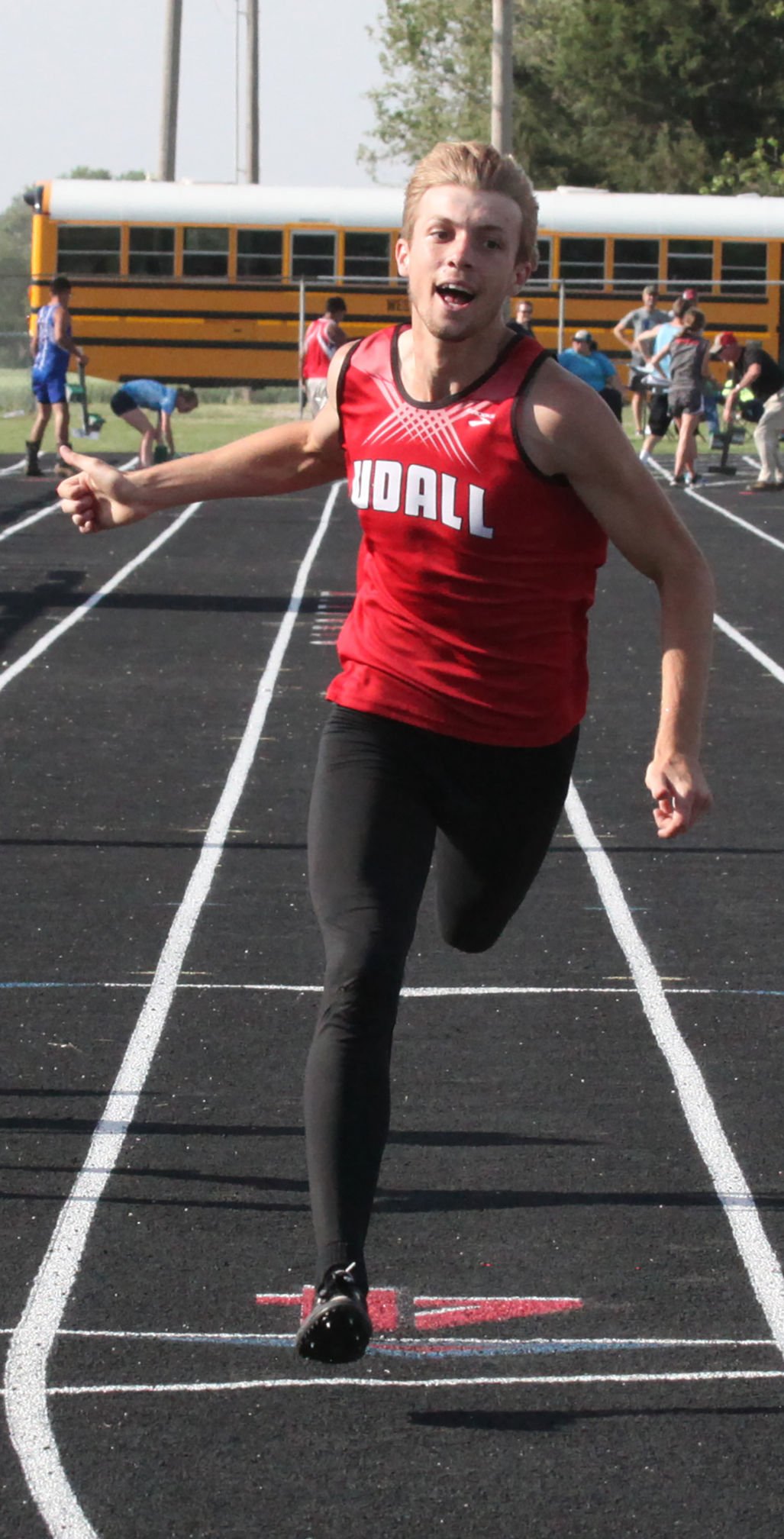 Udall High School junior Joshua Fielder crosses the finish line to win the 100-meter dash in 2018 at the SCBL Championships in Oxford. 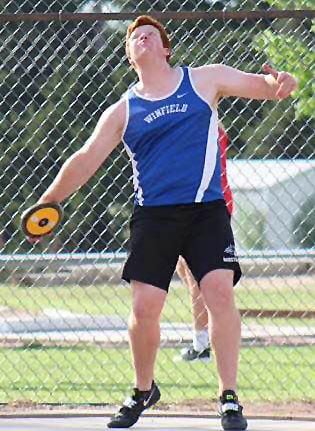 Udall High School junior Joshua Fielder crosses the finish line to win the 100-meter dash in 2018 at the SCBL Championships in Oxford.

Everett continued his assault in the discus, throwing the orb 195 feet, 1 inch to win by 23 feet Friday at the AV-CTL D-III Championships.

Everett, who also placed fourth in the shot put, not only set a personal best in the discus, but set a league and school record in the event.

He now is No. 1 in the state in the discus, No. 3 among juniors in the nation, and eighth overall in the nation among high school athletes.

Senior Bri Hulse led the way with a pair of league titles.

GODDARD — “The Four Horsemen” made it 8-0 in 4x400-meter relay races Friday at the AV-CTL D-II Championships.

Senior Halie Brown, the reigning 5A State champion in the javelin, won the league title by throwing the spear 127 feet, 9 inches — 9 1/2 inches farther than runner-up Libby Schurle of Valley Center.

Senior Caitlin Mannon led the Raiders with a pair of gold medals.

Chance Cook set a league record while winning the boys pole vault. His vault of 13-6 broke the record of 13-4, set in 2006 by Tim Rosenberg of South Haven.

His leap of 21 feet, 5 inches was tops in the long jump. Fielder also won the triple jump, clearing 43-5.

Michaela Mosqueda earned two golds for the Lady Eagles. Mosqueda reached 8-6 to win the pole vault and cleared 15-11 to win the long jump. She also placed third in the shot put (30-5).

Braden Snyder captured the only gold medal for the Cedar Vale/Dexter boys, winning the javelin by tossing the spear 138 feet even.

Winfield High School senior Gavin Crowe earned the sixth-place medal in the final high school tennis match of his career on his home court Saturday at the KSHSAA Class 4A State Championships at the T.H. Vaughan Tennis Center.

The Bulldogs, who qualified their entire team to the Big Show, finished sixth in the State with 18 points, two behind fifth-place Topeka-Hayden.

Crowe was the sole representative for the host Vikings, who placed 10th with 10 points, two behind ninth-place Bishop Miege.

WICHITA — The top-seeded Cowley College baseball team used 4 2/3 scoreless innings of relief and a late rally Sunday to top second-seeded Barton 6-5 in the semifinals of the Region VI/Central District Tournament at Lawrence-Dumont Stadium.

Jack Kistler recorded victory No. 400 in his illustrious career when the host Lady Eagles defeated Oxford 5-2 in the quarterfinals of the Class 2-1A Regional Tournament.

OVERLAND PARK — Junior Menley Westhoff scored the winning run on an error with one out in the bottom of the ninth inning Monday afternoon, leading the Arkansas City High School softball team to a 7-6 walk-off triumph against St. Thomas Aquinas in the semifinals of the Class 5A No. 2 Regional playoffs at Blue Valley Southwest High School.

The long drive to Overland Park, the extra-inning game and Blue Valley Southwest’s relatively easy 16-1 trouncing of Kansas City-Turner all likely contributed to Ark City’s 5-0 loss to the host Timberwolves in the championship game later Monday.