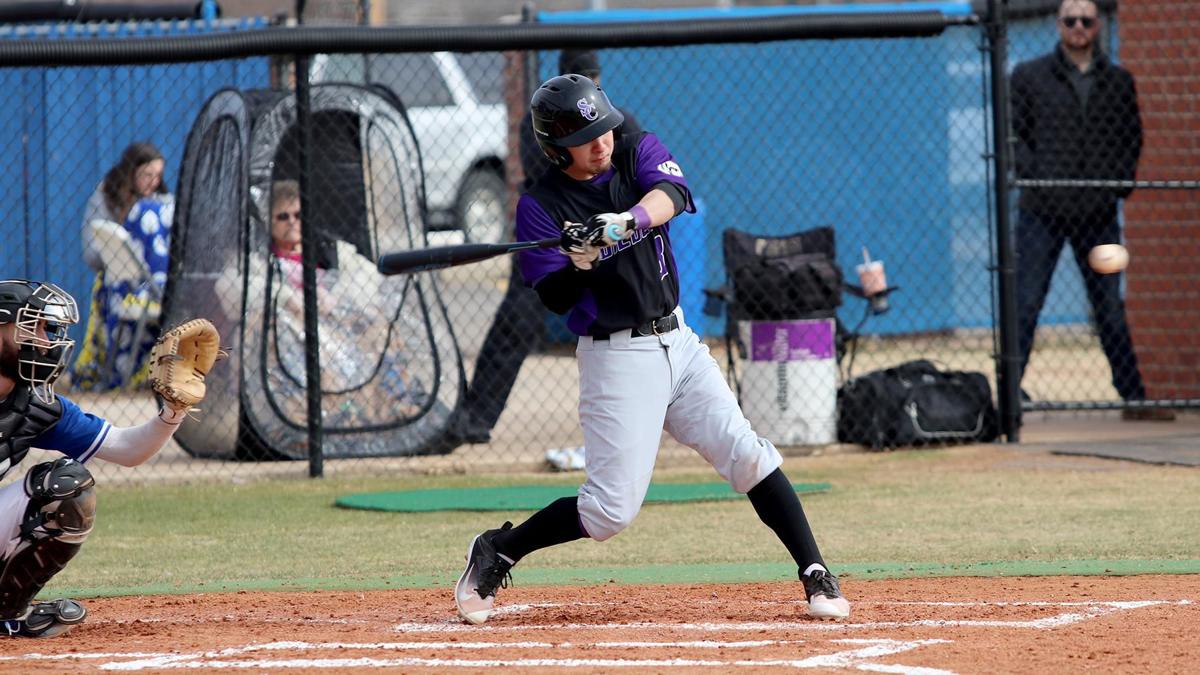 Southwestern College junior shortstop Naotaka Fujieda singled home pinch-runner Jaevious Merriweather with the tying run with two out in the bottom of the ninth inning in 2018 against Oklahoma Wesleyan at the Broadway Recreation Complex. When the throw from the outfield was wild, pinch-runner Gavin Beach raced home to win it. 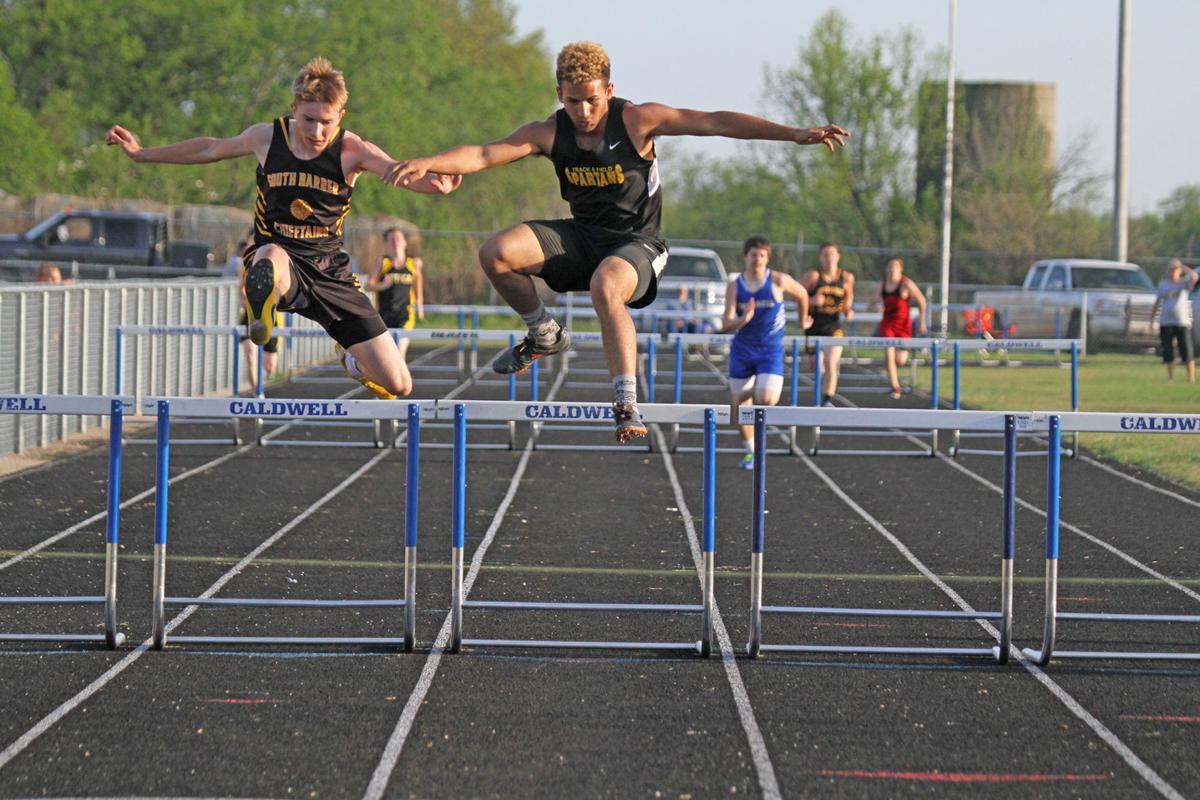 Southwestern College junior shortstop Naotaka Fujieda singled home pinch-runner Jaevious Merriweather with the tying run with two out in the bottom of the ninth inning in 2018 against Oklahoma Wesleyan at the Broadway Recreation Complex. When the throw from the outfield was wild, pinch-runner Gavin Beach raced home to win it.

A furious ninth-inning rally led the Southwestern College baseball team to its first signature win of its modern era Thursday afternoon, and may have shaken up the Kansas Collegiate Athletic Conference leaderboard in the process.

The Moundbuilders scored five runs in the bottom of the ninth inning to defeat No. 5-ranked Oklahoma Wesleyan 6-5 in the opening game of a three-game series at the Broadway Recreation Complex.

Jacob Price went the distance on the mound for the Moundbuilders (20-21, 15-13 KCAC). He allowed five runs, four earned, on nine hits and one walk, with five strikeouts.

Crowe opened with an easy 8-0 shutout of Andover Central’s Luke Redfern and advanced to the title match with an 8-4 triumph against Tyler McGreevy of Eisenhower.

OXFORD — The Oxford Wildcats used an eight-run second inning Thursday afternoon to pull away for a 16-2 nonleague baseball victory against Central of Burden.

If Winfield High School softball head coach Rhonda Tackett issued game balls following victories, she would have run out of them Thursday afternoon at the Broadway Recreation Complex.

The Lady Vikings decimated Towanda-Circle in an AV-CTL D-III doubleheader, combining for 29 runs and 37 hits to annihilate the Lady Thunderbirds 14-4 in the opener and 15-5 in the nightcap.

Tessa Ruggles tripled — her third hit of the game — and trotted home on a single by Emma Schumacher with one out in the bottom of the fifth inning to run-rule Circle in the opener.

Haley Gedrose led off the bottom of the fifth in the nightcap with a double — her fourth hit of that game — and scored on a one-out single by Tessa Irwin to run-rule the Lady T-birds in the second game.

MAIZE — Three out of four entries by the Arkansas City High School boys tennis team advanced to the championship matches Thursday at the Maize Invitational.

The Bulldogs were so close to taking the team title. Maize South defeated Ark City in the title match at No. 2 doubles, finishing with 29 points to 23 for the Bulldogs.

Senior Pierce Klaassen went 3-0 in pool play to advance to the championship match at No. 1 singles.

Klaassen, who dropped just two games in pool play, fell to Jarrod Nowak of McPherson 8-2 in the title match.

Junior Frankie Velasquez duplicated the feat at No. 2 singles, reeling off three victories in pool play to reach the title match. But like Klaassen, Velasquez also fell in the title match, a tough 8-6 setback to Harris Kossover of Maize South.

Wilson ran the 400 in 51.71 seconds to take home the only gold medal for the Bulldogs.

The Lady Cardinals made it a sweep with a 9-1 victory in the nightcap.

Wiley struck out nine and walked just one in her five-inning, run-rule gem.

The Lady Cardinals (7-5, 7-5 SCBL) scored in every inning, ending the game on an RBI single by Macey Pond that drove home Wiley.

Wiley helped herself at the plate, going 3 for 3 with a walk and scoring four runs.

The No. 11-ranked Cowley College softball team finished a dominating conference season Wednesday afternoon by sweeping Cloud County 4-1 and 2-1 in a doubleheader at Lady Tigers Field to capture the program’s first Jayhawk East title since 2013.

The Lady Tigers (38-13, 20-2 Jayhawk East), who have won six in a row, finished the conference season and earned the top seed and a first-round bye in the Region Tournament.

The Wellington Lady Crusaders had to make Winfield work a little harder Wednesday in a nonleague makeup doubleheader at the Broadway Recreation Complex, but the result was another sweep by the red-hot Lady Vikings.

Junior Bailey Phillips and freshman Ali Tate drilled back-to-back doubles with two out in the bottom of the ninth inning, sending the Lady Vikings to a 5-4 walk-off triumph in the opener.

Winfield took the nightcap in the conventional seven innings by the same score.

SEDAN — Jacob Berkley and Noah Rhodd combined on a two-hit shutout Monday, leading Cedar Vale/Dexter to a 12-0 victory at Sedan in the first game of a Walter Johnson League doubleheader.

The visiting Spartans broke through with the go-ahead run in the top of the eighth inning to win the nightcap 3-2.

Berkley walked one and struck out three batters in just one inning of work. Rhodd earned the win by shutting down the Blue Devils on two hits the rest of the way. He struck out 10 and did not walk a batter.

Rhodd helped his cause at the plate, going 4 for 4 with a run and RBI. Berkley added two hits and drove in four, while Braden Snyder was 3 for 4 with two runs and three RBI.

The Raiders swept the discus titles, as Central junior Caitlin Mannon threw the orb 95-4 to win the girls discus. Mannon was runner-up in the shot put (32-3 1/2).

Sophomore Breanna Williams gave the Lady Raiders another title by winning the pole vault with a leap of 8-9.

Udall senior Riley Goodson won the girls 100 hurdles in 17.32, while sophomore Corbin Goodson was runner-up in the girls triple jump (32-0).