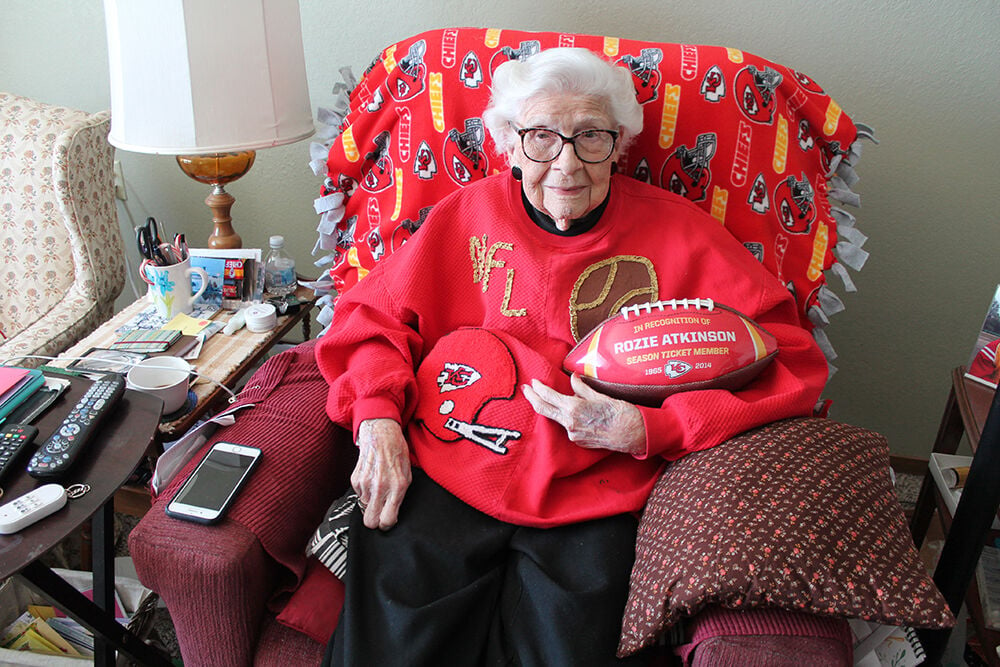 Rozella ‘Rozie’ Atkinson, of Winfield, holds the football recognizing her as a Kansas City Chiefs season ticket holder from 1965 through 2014 — 50 years. ‘I went to all of the games,’ she said. 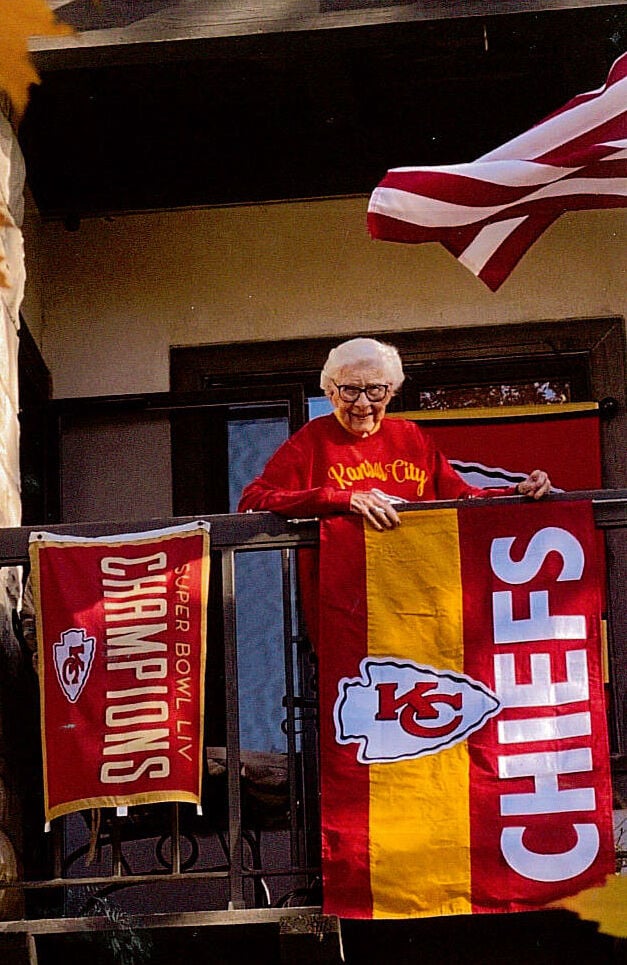 Rozie Atkinson hung a Kansas City Chiefs banner from her balcony this year and last year for Super Bowl Sunday.

Rozella ‘Rozie’ Atkinson, of Winfield, holds the football recognizing her as a Kansas City Chiefs season ticket holder from 1965 through 2014 — 50 years. ‘I went to all of the games,’ she said.

Rozie Atkinson hung a Kansas City Chiefs banner from her balcony this year and last year for Super Bowl Sunday.

It would have been a great present for Rozella “Rozie” Atkinson’s 104th birthday — Feb. 22 — a second Super Bowl win in a row by the Kansas City Chiefs.

But the longtime KC fan is compassionate about quarterback Patrick Mahomes’ performance.

“You could see his foot was hurting him so bad. He was in terrible pain,” she said. “When you throw a pass, you have to put one foot down hard, and you know it hurt him.

“But I’m looking for great things next year. Patrick will be better. And besides, his baby will be here.” (Mahomes and his girlfriend are expecting a daughter).

Of the Tampa Bay Buccaneers, she said, “I don’t like Tom Brady’s looks. I think he wears dentures. You know that (tight end Rob) Gronkowski. When he went with the Buccaneers, you knew it was all over.”

An Illinois girl by birth, Rozie said she never saw any football played until she got a Civil Service job in 1939 in Washington, D.C. She went with friends to see the then-Washington Redskins and quickly became a fan of the team and of the sport.

She was in the stadium the afternoon of Dec. 7, 1941, when she began hearing announcements asking generals and admirals attending the game to report to their headquarters.

No one knew what was going on until the game was over, and on the street they saw the headlines: Pearl Harbor had been bombed by the Japanese and war had been declared.

She had attended the game with two young men who enlisted almost immediately and shipped out of the country within a month.

“We kept in touch with one of them,” she said. “We never heard from the other one again.”

Born in 1917 in the small town of Findlay, Ill., Rozie went to business college after high school and first worked for a lawyer. She took the Civil Service test and did so well she was offered a job in the Department of Justice in Washington, D.C.

She later moved to the Department of Agriculture, where she was the only woman in the department.

“We counted chickens and eggs,” she said with a laugh.

She worked for the DOA in Washington until being moved to New York City in 1945-46. She was transferred to Kansas City in 1947.

“They didn’t have a football team in Kansas City until the Chiefs came in 1963,” Rozie said, so she went almost 20 years without a team. Rozie got her first season tickets in her own name in 1965.

Before that year, season tickets were usually sold to corporations or businesses, not to individuals.

She and a group of friends usually went to the games together. Every game was preceded by a tailgate party that she thoroughly enjoyed.

Some people loved to tailgate so much, they never went to the game, she said.

She likes watching football on TV because you can see what’s happening more clearly. In fact, while football season is on, she’s always watching a game if she can find one, her longtime friend, Julie  Melcher said.

“When football season is over, I’m sad,” Rozie said. She doesn’t like baseball and basketball as much because “there are too many games.”

Over the years, when she wasn’t watching football, Rozie traveled a lot — to England, Istanbul, Greece, Hawaii, Australia. She always went with friends.

“I’m not one to travel alone,” she said, though she never married. “But I’ve had a lot of little ones in my life.”

She and Julie are not related by blood, but met one another through a friend whom Rozie had known many years.

“She’s an adoptive grandparent to my kids and my grandkids,” Julie said.

Julie’s children attended Southwestern College, and her daughter Sarah is married to Dr. Daniel Miller, an obstetrician-gynecologist in Winfield. When Julie and her husband retired, they wanted to move near one of their children, so they decided to move from Kansas City to Winfield, where the Millers live.

“We knew Winfield,” Julie said. “I told Rozie we were going to move and asked her if she wanted to move, too.”

Rozie said she “certainly has been happy” at Cumbernauld Village.

“I can recommend it to anybody. Oh, I complain sometimes, but that’s natural,” she said.

In fact, she moved to Cumbernauld in 2015, a year before the Melchers arrived in town.

Julie said Rozie sometimes misses Kansas City a lot. “But you can’t have everything,” Rozie said.

She said she’s been missing the little kids who were in the preschool classroom at Cumbernauld Village. The classroom was returned to the Winfield Early Learning Center until the pandemic is over.

“The kids were adorable,” Rozie said. “We miss them very much.”

“She played Bingo with them once a week,” Julie said.

“It got the children used to old people, and it certainly pepped us up,” Rozie said.

“My dad said she was too mean to die,” Rozie said.

If the box of fudge, birthday balloon and bouquet of flowers delivered during this interview are any indication, Rozie’s family does not think of her as mean.

Asked about sharing her birthday with George Washington, she said, “We’re just about the same age.”

She also said growing up in Illinois, she always celebrated Abraham Lincoln’s birthday, too.

As to how long she’ll live, Rozie said, “I can’t do anything about it. I just go along with it.”

Who should pay for the spike in gas/electric costs during the cold snap?