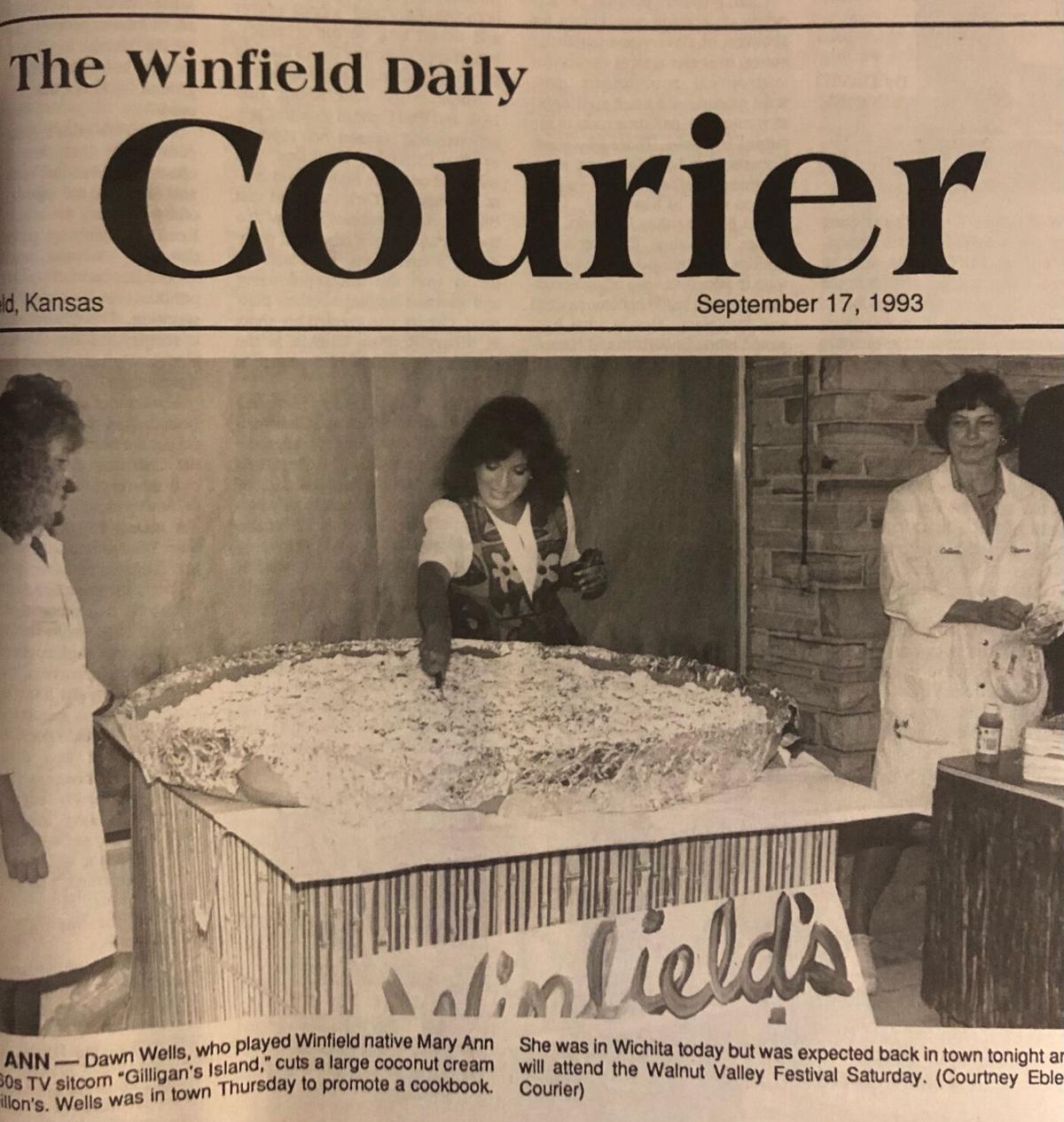 Dawn Wells, ‘Mary Ann’ from ‘Gilligan’s Island,’ cuts a huge pie to share with Dillons customers in September 1993 on her visit to Winfield to promote her cookbook. 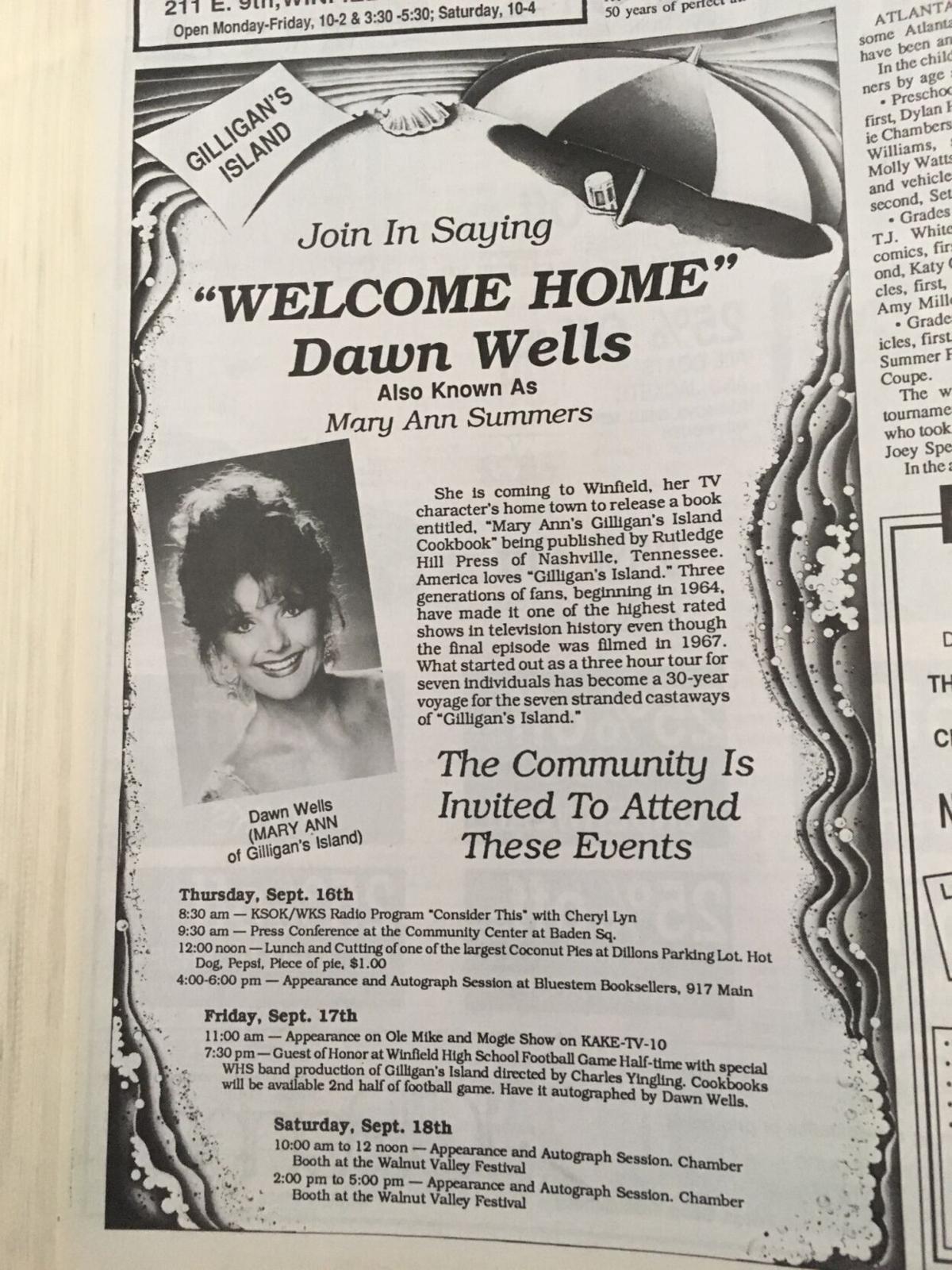 The Winfield community made a big deal out of Dawn Wells’ visit in 1993 to promote the release of  ‘Mary Ann’s Gilligan’s Island Cookbook.’ This advertisement ran in The Winfield Daily Courier.

Dawn Wells, ‘Mary Ann’ from ‘Gilligan’s Island,’ cuts a huge pie to share with Dillons customers in September 1993 on her visit to Winfield to promote her cookbook.

The Winfield community made a big deal out of Dawn Wells’ visit in 1993 to promote the release of  ‘Mary Ann’s Gilligan’s Island Cookbook.’ This advertisement ran in The Winfield Daily Courier.

Dawn Wells, who played the wholesome Mary Ann Summers among a misfit band of shipwrecked castaways on the 1960s sitcom “Gilligan’s Island,” died Wednesday, Dec. 30, of causes related to COVID-19, her publicist said. She was 82.

Wells, on a visit to Winfield, Mary Ann’s fictional home on the TV show, delighted local folks as she promoted her “Mary Ann’s Gilligan’s Island Cookbook” Sept. 17, 18 and 19, 1993.

Sharon Olmstead, at the time the owner of  Bluestem Bookstore in Winfield, hosted Wells on her visit. Wells was “full of energy,” Olmstead said.

“She seemed to be quite excited” to be in Winfield.

What impressed Olmstead most was that Wells “had time for the people” who came to see her. “She had time for the bookstore” where she met fans and signed copies of her book. She also signed the tiled wall where Olmsted had famous people who visited the store leave their autographs.

“She was very nice, with a pleasant sense of humor. She was fun,” Olmstead said.

Wells was in Winfield the week of the Walnut Valley Festival. She attended the festival Friday night and “hung out with” Linda Tilton behind Stage 3, according to Karen Deal of the WVF.

“John McCutcheon always does his first set (of the festival) on Stage 3,” Tilton said. “We didn’t know (Wells) was in the audience.”

After the set was over, Wells went backstage and talked with Tilton and McCutcheon. She told Tilton, a sign language interpreter who had just done that for McCutcheon, “I’ve never seen anybody do what you do as well as you do it.”

“I hang my hat on that,” Tilton said.

Wells did not talk about herself, Tilton said. “She was a regular person like anybody else. She was a charming person, interested in you.”

Mary Ann’s biography (gilligansisle.com) mentions a couple of details people might not recognize about the area: Mary Ann lived on a farm near Winfield in the county of Horners Corners; her father owned the Winfield General Store that was managed by her Uncle George. The biography said Mary Ann found life on the deserted island “more pleasant than her years in Winfield.” People who met Wells when she was in Winfield in 1993, however, did not get that impression of “Mary Ann.”

Wells died peacefully at a residential facility in Los Angeles, publicist Harlan Boll said. “There is so much more to Dawn Wells” than the “Gilligan’s Island” character that brought her fame, Boll said in a statement.

Tina Louise, 86, who played Ginger the movie star, is the last surviving member of a cast that included Bob Denver as the title character; Alan Hale Jr. as the Skipper; Jim Backus and Natalie Schafer as wealthy passengers Thurston and Lovey Howell, and Russell Johnson, known as the Professor.

Wells, a native of Reno, Nevada, represented her state in the 1959 Miss America pageant and quickly pivoted to an acting career. Her early TV roles were on shows including “77 Sunset Strip,” “Maverick” and “Bonanza.”

Wells’ wardrobe included a gingham dress and shorts that modestly covered her belly button, with both costumes on display in Los Angeles at The Hollywood Museum.

TV movies spinoffs from the series followed, including 1978’s “Rescue from Gilligan’s Island,” but Wells also moved on to other TV guest roles and films including the 2002 vacuum cleaner salesman comedy “Super Sucker” with Jeff Daniels. She starred on stage in dozens of plays, including “Chapter Two” and “The Odd Couple.”

Two years ago, a friend launched a GoFundMe drive to help cover medical and other costs for Wells, although she protested she didn’t need the assistance. She did end up acknowledging her need and accepted more than $180,000 in donations.

Tilton was sad to hear that Wells’ life had taken such a turn that she needed financial help.

“She’s such a cultural icon,” Tilton said. “When you talk about ‘Gilligan’s Island,’ you always talk about Gilligan and Mary Ann.”

Tilton was surprised that Wells had visited Winfield 27 years ago. “She made such a lasting impression,” Tilton said.

Dawn is survived by her stepsister, Weslee Wells.

RIP Dawn! Thanks for your character being from Winfield! I’m glad I got to meet you!

Will you get the COVID-19 vaccine?