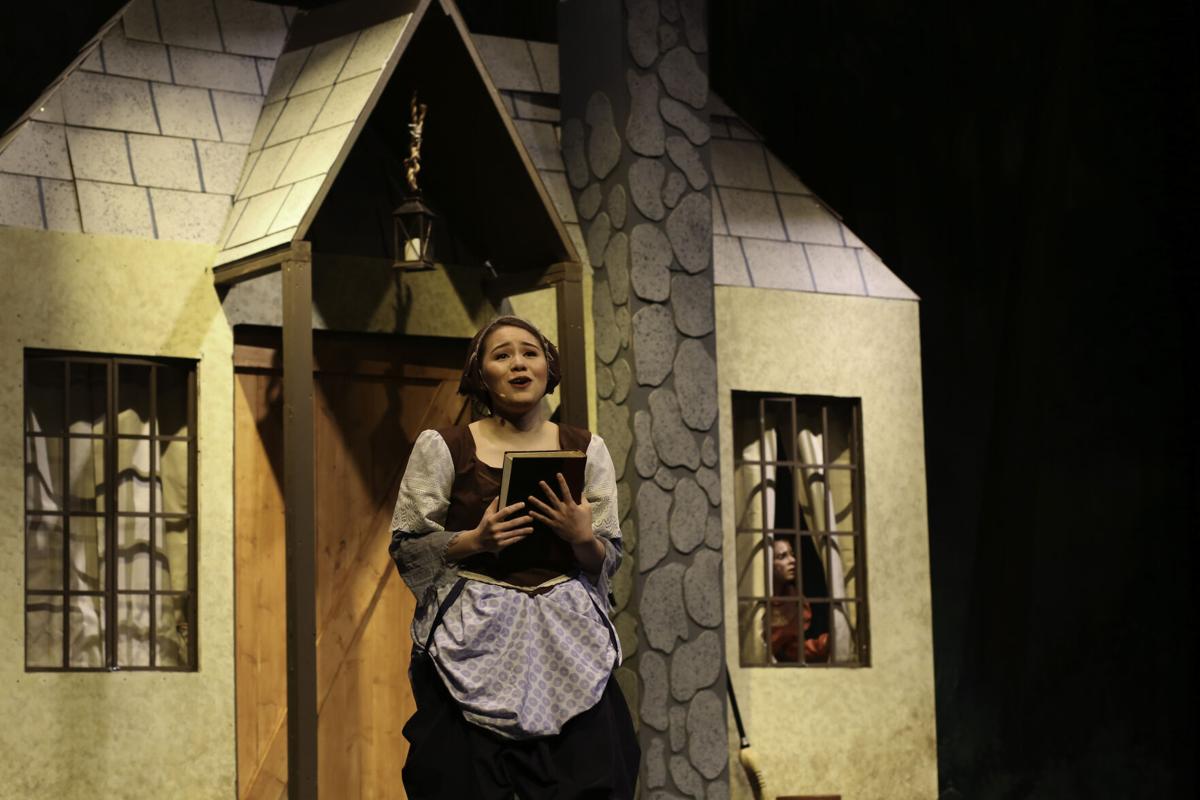 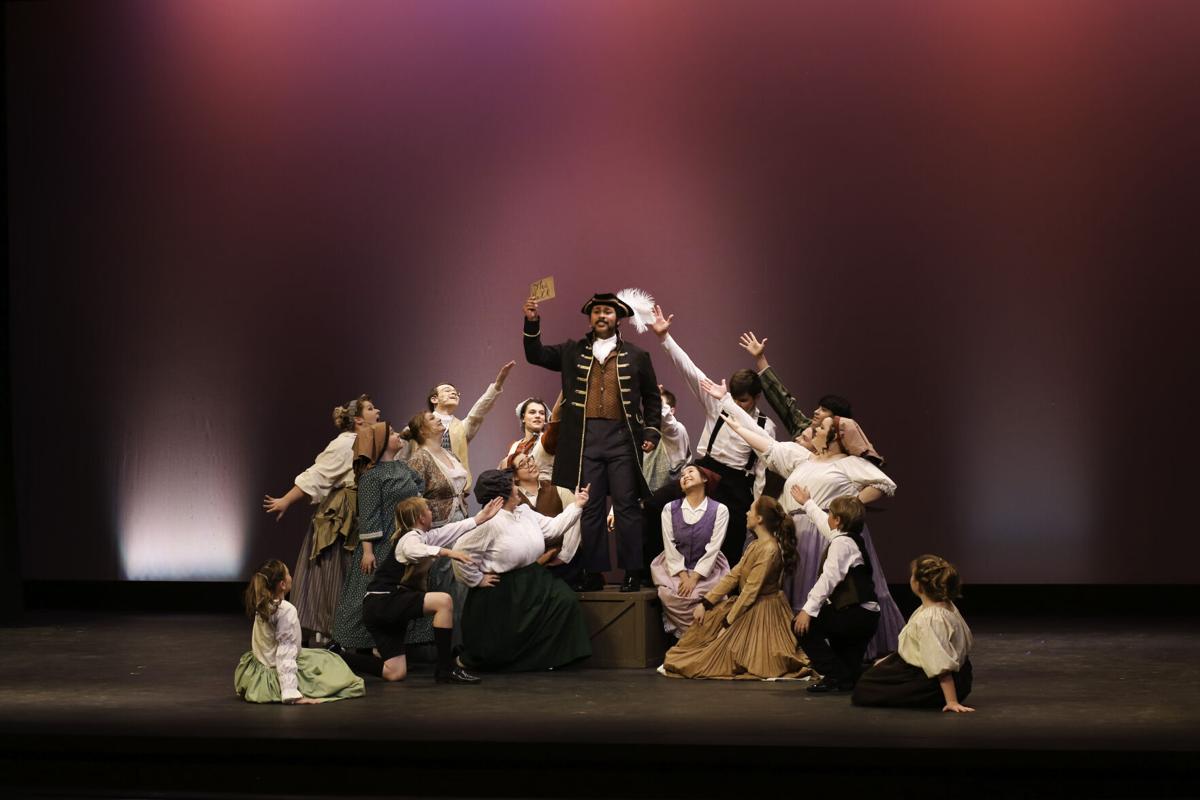 Two of my favs: Fairy tales and musicals.

Rodgers and Hammerstein’s “Cinderella,” with a new book by Douglas Carter Beane, brings an updated slant to a very old story, without losing any of the glamor — the beautiful gowns, the wonderful dancing, the lush music — and the magic.

The dancers swing around the stage fluidly, gracefully filling the stage with swirling color in the “Gavotte” and “Waltz” performed by the orchestra.

The orchestra is smaller than usual, according to show director Nick Albrecht, but it actually seemed very large to me with the Brown Theatre’s acoustics. In fact, though the orchestra is in the pit, it felt to me like it was all around, as though we were in the midst of it, making the audience part of the production.

The set by Jared Shofstall — Cinderella’s house and the staircase leading from the palace — are the really important places in the story, suggestive but not overpowering.

The songs are of longing and love as well as hope for a change in regime, the first stirrings of democracy. I learned in the Masterpiece Theatre show “Atlantic Crossing” (See it if you can; it’s outstanding!) that Norway’s king is elected. The politics developing in “Cinderella” make me think that is where government in that kingdom may be heading.

The only song I recognized is “Do I Love You Because You’re Beautiful?” sung by Prince Topher (Timmy Remington) and Ella (Esmeralda Castillo), a wonderful unanswerable question.

Castillo’s voice is rich and strong. There’s no sense of a downtrodden, overworked girl in Castillo’s Cinderella. She is full of hope and courage .

Remington’s Prince Topher (short for Christopher) has a lovely, clear romantic hero’s voice. If one falls for someone because of his voice, it’s easy to hear why Cinderella falls in love with him. The fact that they are also moved by each other’s kindness and respect only enhances that first aural attraction.

Nick Albrecht’s Sebastian is pompous and dastardly in a refined, handsomely-dressed way. He moves the pieces in his ongoing subjugation of the kingdom with a firm, deep voice that he does not need to raise to get what he wants.

RiQuondrion Mangum’s Lord Pinkleton is a comical courtier too simple to be blamed for any of Sebastian’s machinations, though he is at the heart of much of the action as we see in “The Lord Is Giving a Ball.”

Another character there for the comedy is stepsister Charlotte (Ray Keady) who stands head and shoulders and girth above any would-be suitors, including the prince. Keady also brings out a certain poignancy in the character in “Stepsister’s Lament.” A comic irony comes from the petite Ella’s song about the prince, “He Was Tall.”

The rebel figures, lovers Jean-Michel (Jacob Giger) and Gabrielle (Madilynn Sanderholm), the other, smaller stepsister, get their way by going for it while others are preoccupied elsewhere. Jean-Michel is a bit pompous like Sebastian, which suggests some trials ahead for democracy.

As in “Bright Star” that I saw a week ago at Southwestern, this musical is enriched by having community members as well as students and faculty in the cast.

The two matriarchs — Madame (Josi Schwartz) and Marie, aka fairy godmother (Meghann Borum), are perfect foils and grab the stage when they’re on it. They literally seem larger than life.

Madame strives for power through her daughters. That is her only interest in them; they have no more individuality to her than does Cinderella. In her dresses with crinolines she reminds me of Mother Ginger, the larger than life figure in “The Nutcracker,” but Madame is no positive fertility figure as Mother Ginger is described.

I couldn’t look fast enough to see how Borum’s Marie becomes her magical alter ego and how she performs that magic on Ella, but if anything, she eclipses Madame in her size and impact. Marie’s encouraging songs, “Impossible/Possible” and “There’s Music in You” are inspirational.

All the costumes, designed by Meghann Borum, are quite wonderful eye candy.

The subplots of many Rodgers and Hammerstein’s musicals break my heart with love unfulfilled and death. And at least one version of “Cinderella” has the sisters wearing hot iron shoes and dancing until they fall down dead. I’m glad this production has neither of these elements.

This is truly a springtime show and a fitting addition to the rebirth of musical theatre in the area. Enjoy!

“Cinderella” is onstage tonight at 7:30 p.m. and Sunday afternoon at 2 p.m. in the Robert Brown Theatre. Tickets are available at the door.

What a great show! I have really enjoyed playing in the pit for this one, it is probably my favorite so far.