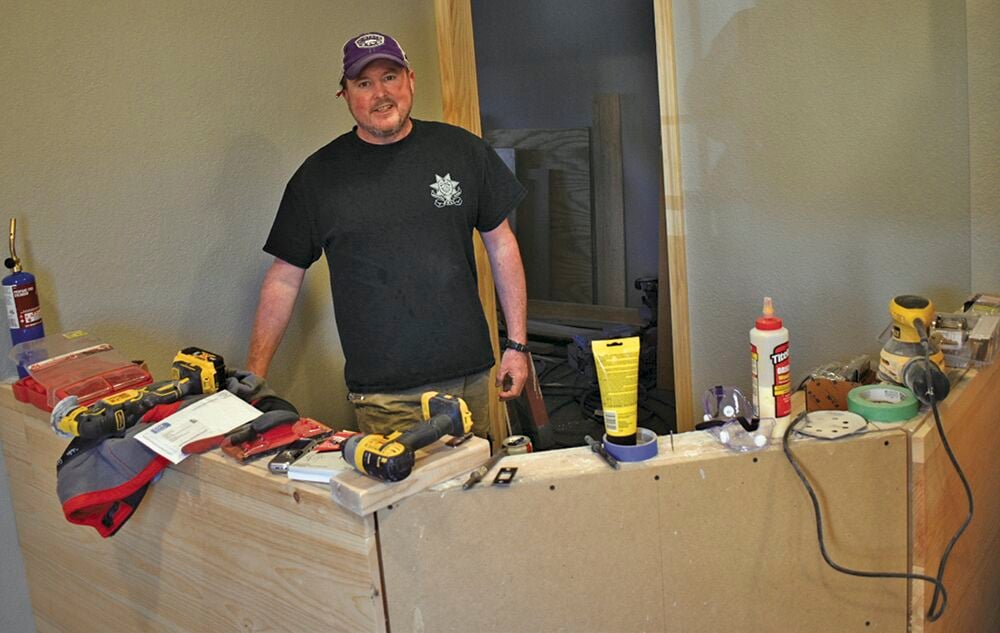 Dr. Tyson Blatchford worked Thursday on the interior of his building at 119 E. Chestnut Ave., in Arkansas City. Blatchford is revamping the building in order to open a new independent clinic and wellness spa, which he expects to have open in March.

Dr. Tyson Blatchford worked Thursday on the interior of his building at 119 E. Chestnut Ave., in Arkansas City. Blatchford is revamping the building in order to open a new independent clinic and wellness spa, which he expects to have open in March.

Arkansas City will soon have a new medical clinic in the downtown area.

Dr. Tyson Blatchford has purchased the building at 119 E. Chestnut Ave., and plans to open his own independent practice. He said the new clinic, Chestnut Wellness Surgery and Medicine, would open in March. Remodeling is under way.

Blatchford said he had been an employee of the South Central Kansas Medical Center for 13 years. He said during the past five years, he has wanted to venture out and establish a practice of his own.

He said the new clinic would offer the same general surgery practice that he was able to provide at Winfield Medical Arts, along with a few new services.

“We’re going to open up a wellness center and spa,” he said.

Blatchford said the spa would offer a type of nutritional IV infusion that will help patients with skin complexion, memory and high dosage vitamin-C treatments to help with the treatment of COVID.

“We’re going to have our cosmetic Botox and several products that are similar to it,” he said. “We’re going to start simple, and expand as we get busier.”

Minor surgeries, such as skin lesions and other small procedures, will be handled at the clinic. Blatchford said any procedures requiring anesthesia would still have to be performed at the hospital.

He is also planning to implement new technology that will provide several new services to his patients. Patients will be able to watch their procedures on a special TV, or choose something they find calming and soothing. Patients also will be able to access all their medical information from their homes, and even check in for appointments before their arrival.

“You won’t have to wait, you can just show up and be seen,” he said. “It kind of streamlines the process, and we’re excited about it.”

Blatchford said that operating an independent clinic will be a big adjustment at first, as he will be responsible for patient care and the business end.

“It’s going to be an added effort to manage both,” he said. “But I feel like this is the right time in my life to do that and I’m real excited about it.”

Blatchford said most of the major construction work on the building was contracted out, but he and his family have completed much of the inside work themselves. He said his family watches over him pretty closely.

“They tell me to be careful with my hands,” he said with a laugh.

Along with putting the finishing touches on the building, he said he still has a lot of other things that he is working to finalize. As a new medical practice, he will need to become credentialed for Medicare and other medical insurance providers. He said that process usually takes several months.

“It’s the big things, and it’s the little things,” he said. “Business bank accounts, electronic medical records, there’s a lot of moving parts to this.”

Blatchford said Thursday that the building was nearing completion. New flooring is being installed and the new signage should be in place soon.

“It’s going to be exciting to have something new going on in Ark City,” he said. “Not just with the surgery practice, but also being able to do the spa, too.”

Efforts to reach South Central Kansas Medical Center about Blatchford leaving and its plans for his position were not successful Thursday.

Who should pay for the spike in gas/electric costs during the cold snap?