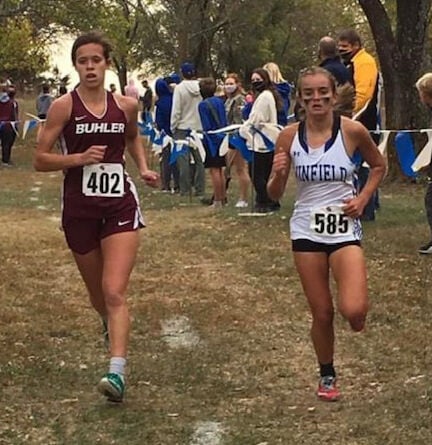 WHS sophomore Kayli Myers keeps up with Buhler’s Leah Bentley. Myers broke her own school record, but finished second to Bentley by less than 19 seconds. 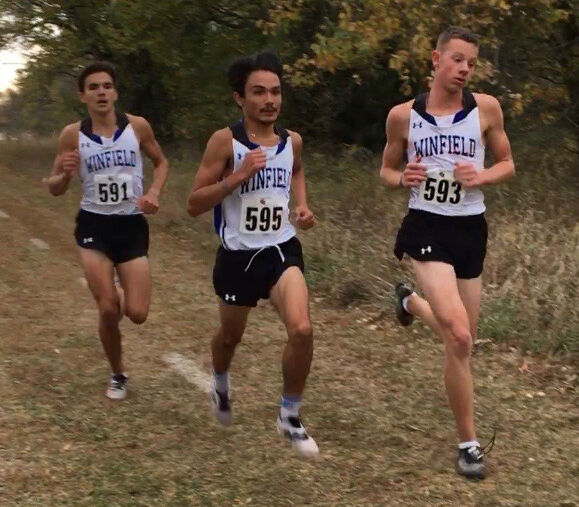 WHS sophomore Kayli Myers keeps up with Buhler’s Leah Bentley. Myers broke her own school record, but finished second to Bentley by less than 19 seconds.

The WHS boys needed just five points to pull even with the defending Class 4A State champion Crusaders for the team title.

“I was very proud of their efforts and how far they have progressed throughout the season,” WHS coach Torey Keller said. “Earlier in the season, Buhler had beaten us by over 40 points at their invitational.”

The Lady Vikings were runner-up to the reigning 4A State champion Lady Crusaders by 22 points.

“I felt our girls got out really well early in the race and wanted to take control. As a team, we struggled over the last half of the race, but I’m not sure I would have wanted to change too much,” Keller said. “We could have gotten out a little easier, but I felt we needed to put ourselves in contention to win, and then see how things would play out. Nevertheless, it was by far our best showing of the season. Like the boys, Buhler girls had beaten us pretty badly in early September. We have closed that gap and I believe we are now one of the top 5 teams in Class 4A.”

The Crusaders swept the individual titles, too.

Winfield sophomore Kayli Myers broke her own school record in the girls 5K race, finishing in second place in 19:43.2. She set the school mark earlier this season and earned all-league first-team status with her runner-up finish.

WHS freshman Skylar Flower was a solid eighth in 21:01.33. Senior Elly Bertholf was one spot behind (21:19.69), and sophomore Gracelynn Benavides placed 11th (21:26.52), earning all-league second-team status for their efforts.

“We continue to have great leadership from two of our seniors, Craig LaBrue and Camilo Tarin. They have shown the others what hard work and dedication can do for themselves and team aspirations,” Keller said. “We have three sophomores that have really made a difference on our team strength. Corban Priest would lead that group, as he ran No. 2 for us yesterday. He has gone from an upper 17 minute runner from last year to a lower 16 minute runner this year, and more importantly, has moved from a mid pack runner to a top 10 runner.”

The Vikings are set to compete Oct. 24 in the Class 4A Regionals at the Lakeview Recreation Area in Chanute. The girls run at 10 a.m., and the boys at 10:35 a.m. Chanute, Coffeyville, Fort Scott, Independence, Iola, Labette County, Parsons and Wellington are expected to join Winfield.

“I feel that both squads have the chance to win the meet and qualify for the state championships,” Keller said. “But as always, we as a team must compete and do our job to reach our team goals.”