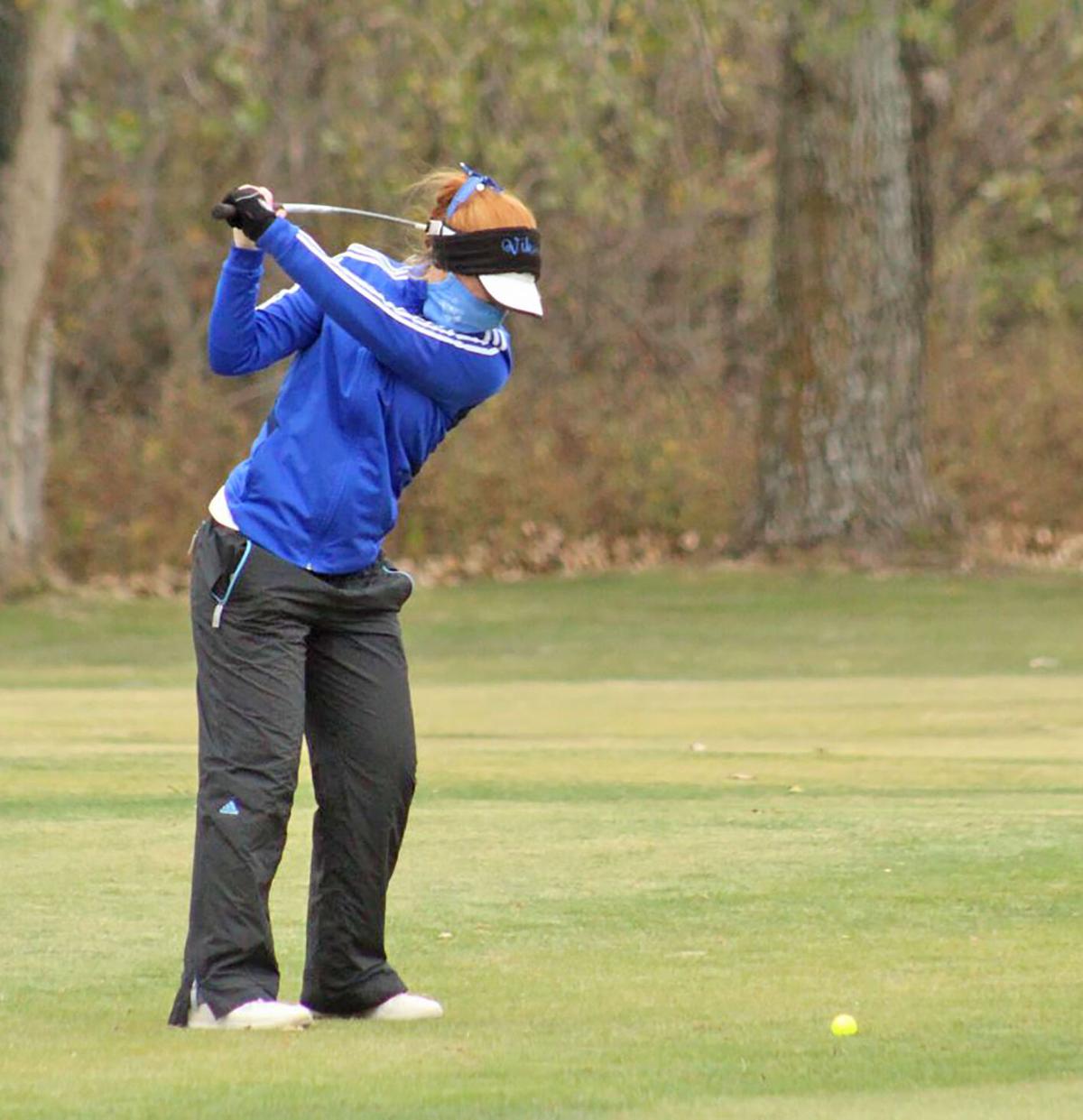 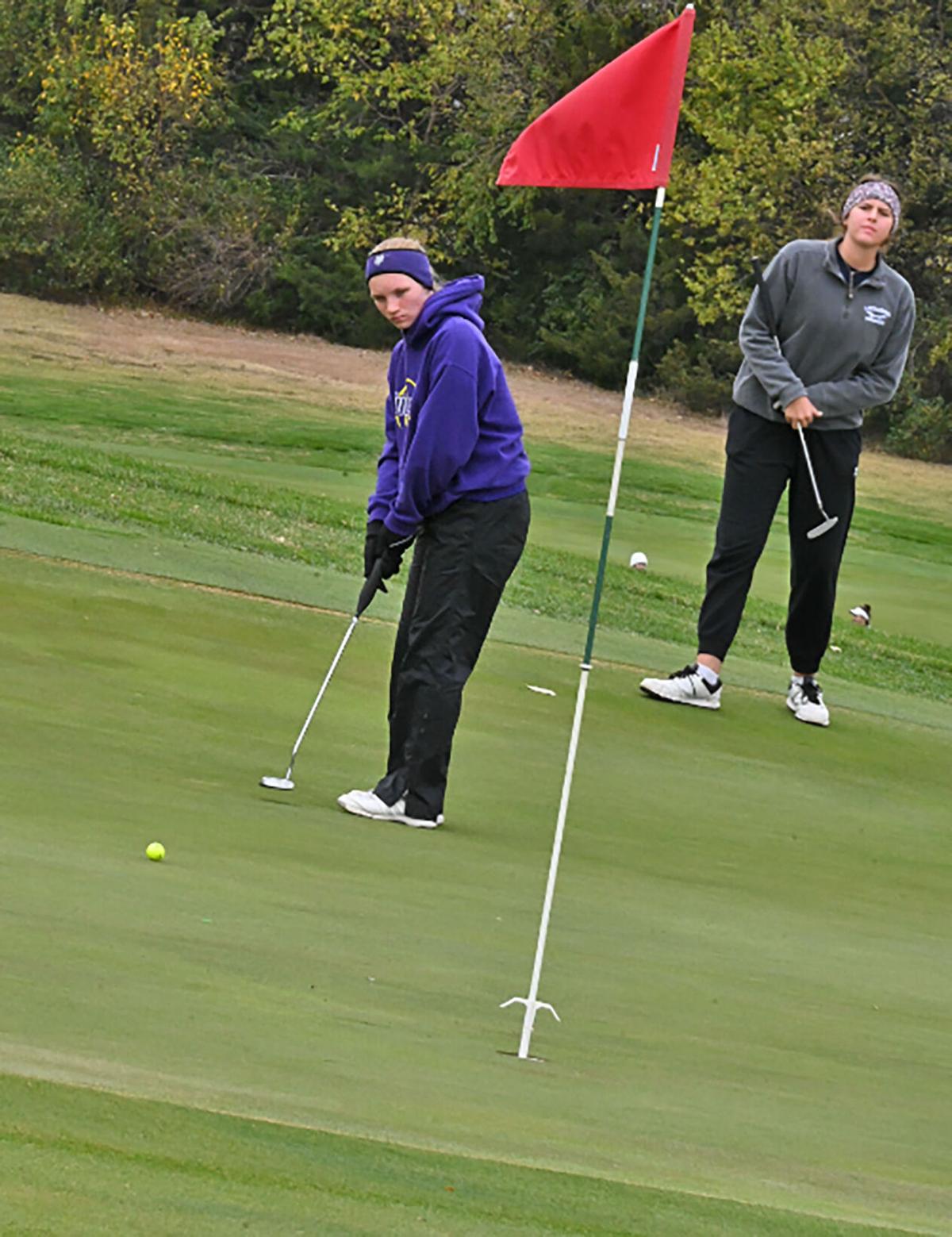 The Lady Vikings caught them at just the right time.

Winfield captured the State title on a cold, overcast Tuesday at the KSHSAA Class 4A State Championships at Emporia Municipal Golf Course.

The Lady Vikings carded a team 368 on Day 2 of the two-day meet after shooting a 370 on Day 1, giving them a two-day score of 738 to win the State title by six strokes over runner-up Wamego.

“The girls grinded out a win in some pretty cold temperatures,” WHS coach Dave Bertholf said. “I was proud of our team’s effort.”

The Lady Red Raiders sat in the driver’s seat after play on Day 1 with a 366, three strokes ahead of Winfield. But Wamego slipped to a 378 on Day 2 to finish with a 744.

Andale surprised with a 362 on Day 2 to climb into third place with a two-day 749, two strokes better than defending 4A State champion Buhler. The Lady Crusaders paired a 377 with Tuesday’s 374.

Payton Ginter of Wellington took the individual State title with a 158, one stroke ahead of State runner-up Abaigeal Donovan of Concordia.

WHS senior Elly Bertholf tied Ginter with a 76 on Day 2. But Bertholf was unable to improve on her third-place finish on Day 1 with a two-day 160.

Just as she did on Day 1, Bertholf opened with back-to-back bogeys. However, after saving par on the next four holes and five out of six on Day 1, she solved No. 3 and No. 5 with birdies on Tuesday and had just one more bogey at the turn, shooting a splendid 1-over 36.

Bertholf settled for par on the first four holes after the turn before a nasty double-bogey on No. 14 that might have cost her the state title. It was the only tough hole for her on Tuesday, though, with just two bogeys on the back nine and a 4-over 40.

“Elly really played well on Day 2 and tied the low round of the day with a 76. She battled some adversity in the middle of her round on Day 1,” Bertholf said. “I was proud of how she responded and finished out the season. She had a great high school career.”

After finishing a solid eighth with an 88 on Day 1, WHS junior Chaney Littell needed six more strokes on the second day of play.

Littell still cracked the state top 10 in a tie with Morgan Brusven of Tonganoxie with a 182.

Littell had a birdie and four par holes on Day 1, then birdied the same No. 10 hole again Tuesday. However, just three par holes, six double-bogeys and a wicked triple-bogey on No. 14 sent her to a 94 on the second day saw her drop to 17th on the leaderboard.

Sophomore Savanna Nickum shot near-even rounds of 98 and 99 to tie for 30th in the state with a two-day 197.

Nickum was sitting with a 43 on the back nine entering the final hole.

A par on No. 18 would have moved her as high as 23rd on the final leaderboard, but disaster struck. She needed five more shots on the par-4 hole. Her only other real blemish on the day was a triple-bogey on No. 7.

Junior Dalin Bartel matched even rounds of 100 to tie for 34th.

After just one par on Monday, she recorded par three times Tuesday, but was hurt by a triple-bogey on No. 7 and a 5-over on the 4-par No. 9 hole that left her with a 52 at the turn.

Two of her pars came on the back nine, where she was able to shave four strokes off with a 48.

Junior Celine Mendoza was disqualified on Day 1, but bounced back with a 99 on Day 2.

“Celine got DQ’d for not finishing a hole with the correct ball,” Bertholf said. “She is a little embarrassed by it and it didn’t hurt our team score at all. With the COVID rules, no markers were used. If a marker was with her group, she would have never been DQ’d. It was basically a misunderstanding between the girls in her group. I felt bad for her, but she responded and played well on Day 2.”

The AV-CTL Division III saw three teams place in the top 10. In addition to Winfield and Buhler, Towanda-Circle finished eighth.

“We benefited from a rule change that allowed assistant coaches to coach this year and Coach (Kevin) Hottinger was invaluable,” Bertholf said. “He did a great job. It is nice to have a coach of his caliber on the course with the girls.”

SALINA — Arkansas City High School senior Bella Wood, who ended her high school career as a four-time state qualifier, moved up six spots to a tie for 37th on Day 2 of the KSHSAA Class 5A State Championships at Salina Municipal Golf Course.

Wood shaved six strokes off of a 95 she shot Monday, firing an 89 to finish in a three-way tie.

Her score would have tied for 14th in the 4A State meet in which she competed last season.

Libby Green of Mill Valley won the 5A State title with a two-day 143. She was the lone 5A golfer to break 70 on the first day, recording four birdies and firing a 1-under 69.