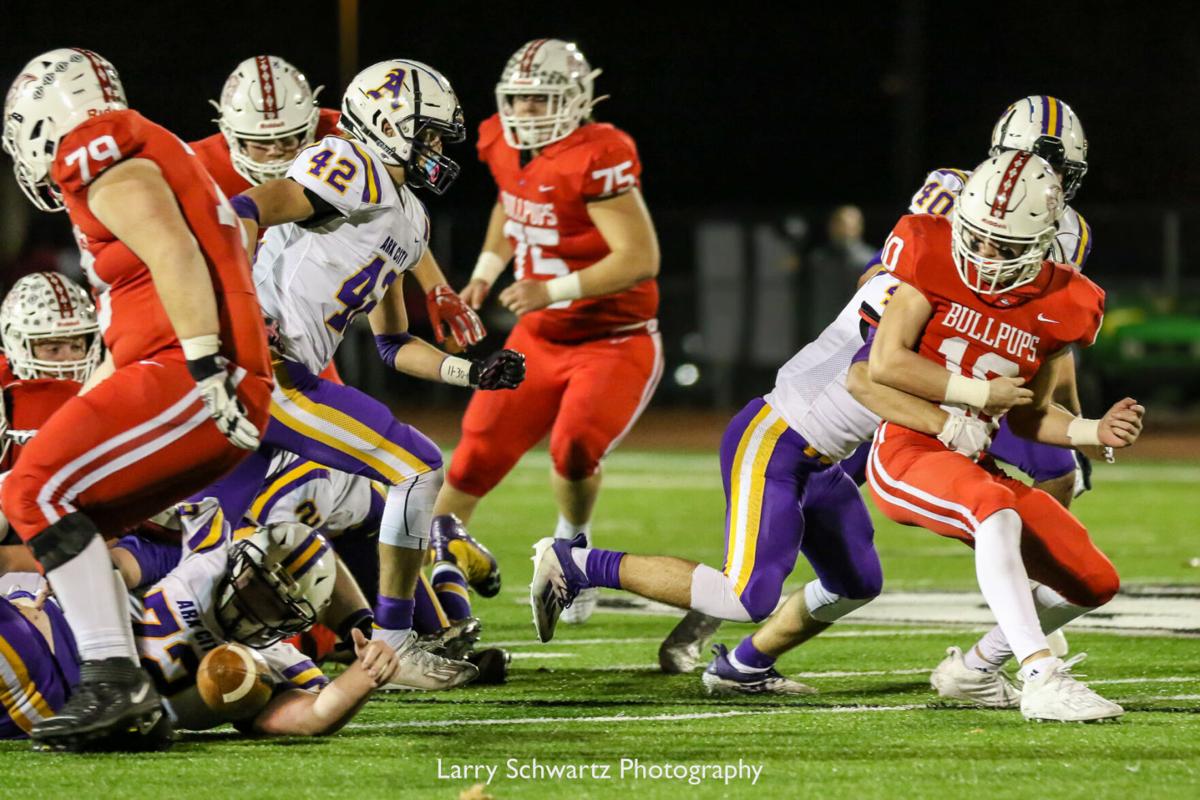 Arkansas City High School senior defensive lineman Jarrett Brooks, bottom left corner, is about to secure the football for a fumble recovery as senior defensive back Owen Bucher wraps up McPherson tailback Jaytin Gumm, far right, who lost the football on a run with 5:02 left in the third quarter Friday night at McPherson Stadium. The Bulldogs forced three turnovers while committing none. 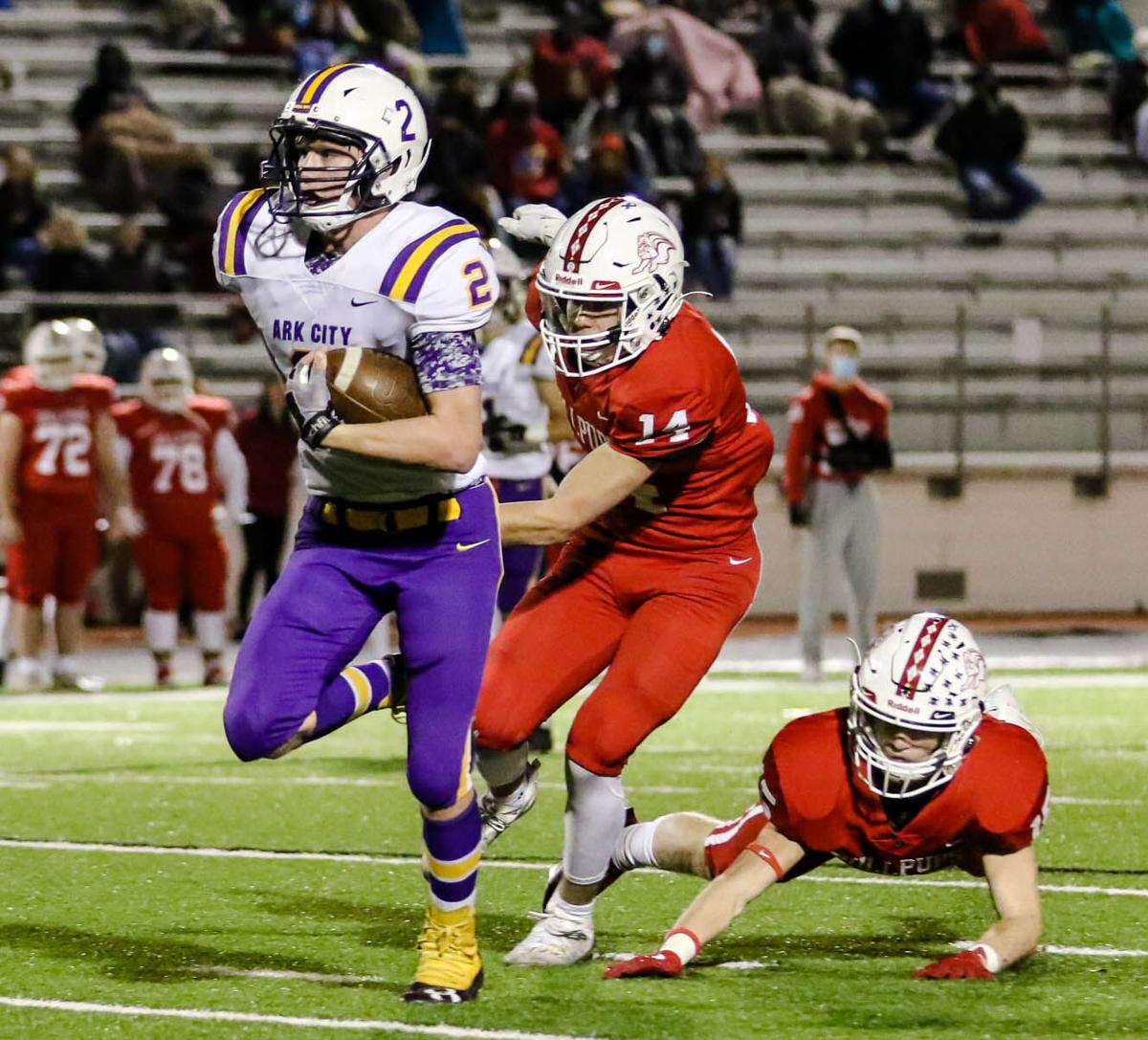 Arkansas City High School senior defensive lineman Jarrett Brooks, bottom left corner, is about to secure the football for a fumble recovery as senior defensive back Owen Bucher wraps up McPherson tailback Jaytin Gumm, far right, who lost the football on a run with 5:02 left in the third quarter Friday night at McPherson Stadium. The Bulldogs forced three turnovers while committing none.

McPHERSON — “Das Wunderkinds,” “Kamikaze Kids,” “Young Guns” — it doesn’t matter much what they’re called, because for the past four weeks they can be addressed as “winners.”

Senior Devon Watkins intercepted McPherson quarterback Dylan Rinker at the 3-yard line with 2.5 seconds remaining Friday night, sending the Arkansas City High School football team to the state championship for the third time in school history with another improbable upset victory, knocking off No. 2-ranked McPherson 28-27 in the KSHSAA Class 4A Sub-State semifinals at McPherson Stadium.

The Bulldogs (6-6) will take on St. James Academy at 1 p.m. this Friday for the Class 4A State championship at Gowans Stadium in Hutchinson.

The Thunder (7-4) stunned six-time reigning 4A State champion Bishop Miege 36-35 in overtime Friday night in the other 4A semifinal.

“It feels more rewarding,” ACHS senior lineman Jarrett Brooks said. “We play in a really, really tough league. Because we were 2-6, it doesn’t mean we’re a bad team. We play as good as a schedule as we can.”

The difference in the Ark City game came down to a missed extra point by McPherson kicker Blaise Hoover after the Bullpups (10-2) scored with 6:30 left in the third quarter to take a two-touchdown lead. The kick might have been deflected by Ark City sophomore Cadon Clark, who made an outstretched, diving leap.

Trailing 27-14, Ark City went to work and as usual, the Bulldogs did it in the most unconventional of fashions.

Watkins returned the ensuing kickoff 30 yards, but Ark City was flagged for unsportsmanlike conduct, moving the ball back to the ACHS 35-yard line.

The Bulldogs then ran three consecutive running plays — the same Bulldogs who entered the game averaging 2.0 yards per carry. On fourth-and-1, sophomore quarterback Gabe Welch found junior Lance Blubaugh on a 14-yard pass to set up first-and-goal at the McPherson 2. Sophomore Wyatt Bahm plunged in from there to make it a six-point game.

The Ark City defense, which allowed the Bullpups to score two third-quarter touchdowns on drives of just five plays each, held McPherson to three-and-out.

This time it was the Bulldogs who scored quickly, running three plays before Bahm broke free on a 56-yard touchdown run with 38.1 seconds left in the third quarter. Clark’s extra point gave Ark City a one-point lead with a full quarter left to play.

Neither team could convert a fourth down, failing on the next two possessions each. On McPherson’s next drive, Rinker’s pass to Gus Ruddle tipped off of Ruddle’s fingers into the waiting arms of Clark, who corralled the interception and halt the drive.

The Bulldogs still were unable to move the football and were forced to punt, giving McPherson 46.9 seconds to either reach the end zone or set up a game-winning field-goal try.

“The first thing I had to do is get over the fact we couldn’t get one more first down to keep our defense off the field. I felt good about it — we have been tested before and I trust the group that was out there. We had made them burn all of their time outs and they had to go 70ish yards with forty something on the clock.

The Bullpups did neither.

They completed a pair of first downs, but Ark City senior Owen Bucher prevented McPherson tailback Jaytin Gumm to get out of bounds and stop the clock on a short pass play.

Rinker spiked the ball, leaving 9.1 ticks on the clock and the ball at the Ark City 25-yard line.

Rather than attempt what would have been about a 42-yard field goal, the Bullpups elected to go for the win. Rinker reared back and fired the ball toward the end zone, right into the hands of Watkins for the game-clinching interception.

“Coach told us to watch the quarterback and don’t commit too early,” Watkins said. “I was backpedaling, he didn’t throw it in a very good spot and I was fortunate to be under it.”

Watkins returned the first kickoff 52 yards, but it was called back on a holding penalty. He returned his second kick — after the Bullpups took a 14-7 lead on an 8-yard TD run by Gumm — 80 yards to the McPherson 3, where Welch eventually scored on a 1-yard TD to tie the score again.

It was the second scoring drive in a row by the Bulldogs that lasted just two plays. The first came on one of several mistakes by McPherson’s special team as well.

Facing fourth-and-9 at the McPherson 37, Welch scrambled nine yards for the first down, but the ball squirted out of his hands. However, Bucher corralled the fumble and rambled 21 yards to set up first-and-goal at the 3. Two plays later, Welch plunged in to tie the game 7-7.

Ark City’s great field position was set up by another costly error by the mistake-prone McPherson special teams. Punter Jayden Dukes awaited the snap, but it sailed over his head. He ran down the ball and gave a desperation attempt at a punt, but it went backward.

In addition to the two interceptions, the Bullpups also lost a third-quarter fumble that was recovered by senior lineman Jarrett Brooks.

McPherson outgained the Bulldogs 378-270 and recorded six more first downs (17-11), but committed the three turnovers and was just 5 of 14 on third down.

Bahm had by far the best running game for Ark City this season, finishing with 137 yards and a touchdown on 21 carries.

“We are getting a lot of lighter defenses because of our passing game,” ACHS coach Jon Wiemers said. “They were rushing three and dropping eight.”

Welch added 44 yards and two scores on 12 totes while completing 14 of 23 passes for 88 yards, with no interceptions. Clark hauled in six passes for 61 yards.

“The third phase of the game was huge for us. The kickoff return was basically a touchdown and we made every extra point, which turned out to be big,” Wiemers said. “The biggest adjustment made offensively was getting our run game situated against what they were doing with a three-man front. We had a few in the first half we thought could pop, but they were only getting 2-3 yards. We needed to get 4-5 yards and ended up breaking some big runs.”

Rinker was 22-of-31 passing for 225 yards and one TD, a 44-yard pass to a wide-open Trey Buckbee with 1:25 left in the third quarter. Aaron Powell caught eight passes for 105 yards for the Bullpups, who lost in the state semifinals for the third consecutive year.

“Now we know we can’t lose,” said senior lineman Max Shannon, who also is the starting heavyweight on the wrestling team. “You want to keep going in the playoffs. I love wrestling, but I don’t want to go to wrestling practice yet.”

Will you get the COVID-19 vaccine?