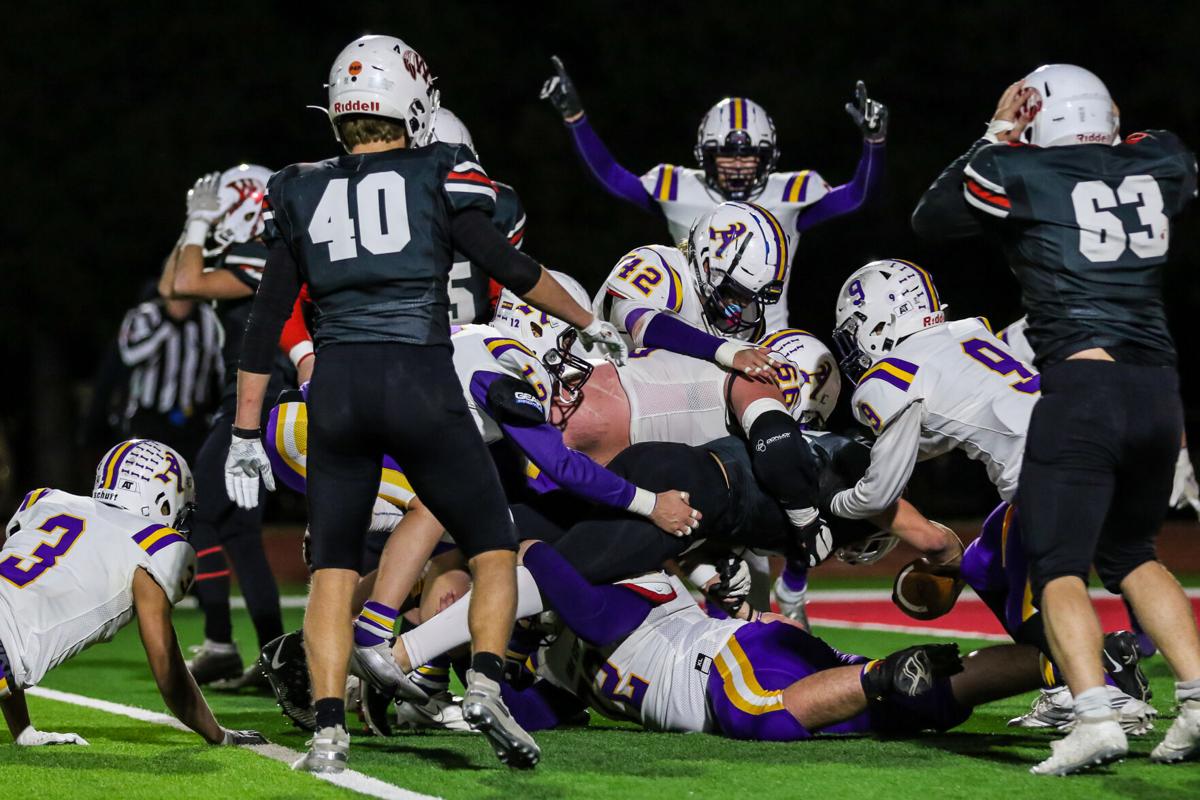 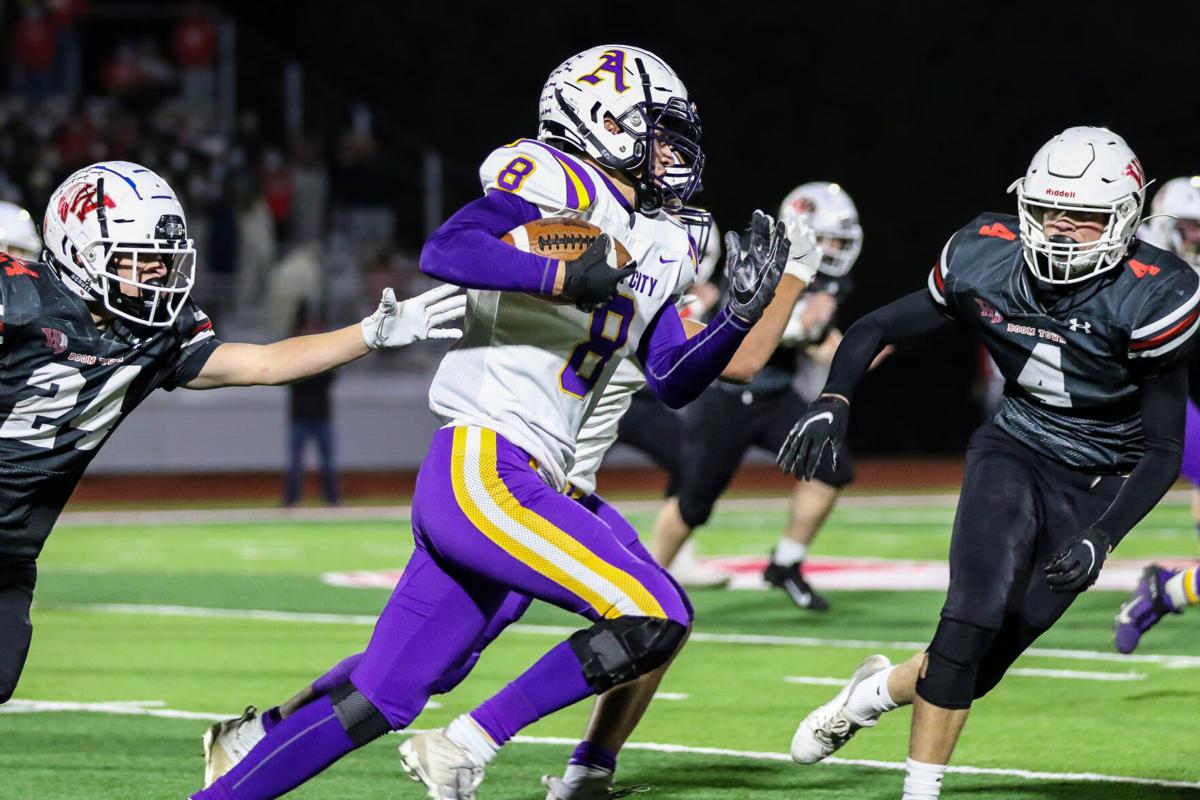 Arkansas City High School senior Haden O’Toole returns an interception with 2:57 left in the third quarter Friday at Wamego. A long return was brought back by a penalty.

Arkansas City High School senior Haden O’Toole returns an interception with 2:57 left in the third quarter Friday at Wamego. A long return was brought back by a penalty.

WAMEGO — The Arkansas City High School football team did something that no Bulldog team has done in 32 years.

The Bulldogs had to stave off another goal-line stand to do it.

Ark City stuffed Wamego quarterback Hayden Oviatt on a 2-point conversion with 15.2 seconds remaining, allowing the Bulldogs to escape Wamego Stadium with a wild 21-20 victory Friday night in the KSHSAA Class 4A Sectionals.

The victory propelled the Bulldogs (5-6) to the Sub-State semifinals for the first time since 1988, where they will play at 7 p.m. this Friday at McPherson.

Oviatt had just scored on a 2-yard leaping plunge into the end zone, setting up the Red Raiders (6-5) for a game-tying extra point.

Wamego head coach Weston Moody instead elected to go for the win as the Red Raiders set up on the 3-yard line for a 2-point conversion try.

They never made it.

Ark City senior Devon Watkins was the first to plunge through the line, catching Oviatt by the ankle just long enough for the calvary to arrive. Senior Jarrett Brooks quickly followed with a single-leg as senior Max Shannon wrapped up the quarterback. Junior Rhett Lathers and sophomore Cadon Clark converged as Oviatt tried desperately to reach for the end zone, coming well short.

“I felt great about our defense in that situation,” ACHS coach Jon Wiemers said. “From an offensive perspective, I know it is really hard to get three yards running the football when someone knows you are going to run it. From their perspective, they had to feel pretty confident about how they ran the ball that drive. The odds of them throwing it in that situation were pretty slim and we had a good call vs. the run. More importantly, we had a bunch of kids out there that I trust to make a play in that situation.”

Wamego tried an onside kick, but Ark City senior Hayden O’Toole corralled it at the Bulldog 44. Quarterback Gabe Welch took a knee to send the Bulldogs into the Final Four.

Not bad for a bunch of sophomores sprinkled in with a few key senior leaders.

“We had to grow up fast this year in order to compete,” Wiemers said. “Much of that is due to our senior class. There aren’t many of them, but they are all individuals that exemplify the standards of what a good team looks like. We are more player-led now and that rubs off on our younger kids.”

The Raiders jumped out to a 7-0 lead by cashing in a fumble when Welch threw a lateral from his own 32-yard line to senior Owen Bucher that fell incomplete at the 29. Aaron Matthews deftly jumped on the ball for Wamego, setting up Oviatt’s 2-yard TD run.

Ark City answered with a seven-play, 65-yard drive capped by Welch’s 5-yard touchdown keeper. That drive also was aided by a huge catch by O’Toole, who returned last week from knee surgery. This time O’Toole hauled in his only reception of the first half, a 44-yard pass from Welch on third-and-13 to the Wamego 4.

The Bulldogs took the ball to start the second half with a 7-7 tie before the drive stalled at the Wamego 5-yard line.

Facing fourth-and-goal, the Bulldogs set up for a 22-yard field-goal try. Clark, the holder, instead turned and ran the fake untouched into the end zone.

“We were in the right situation to use it at that point,” Wiemers said. “Coach (Tanner) Spencer and Coach (Adam) Dorsey do an amazing job with our special teams. It has been the ‘X’ factor in some of these wins the last couple weeks that isn’t always noticed. We had talked about using it in a situation like that all week, so it’s good to have it in your back pocket when you need it.”

Ark City rook a 21-7 lead with 5:17 left in the third quarter with a nine-play drive capped by an 8-yard touchdown pass from Welch to senior Haden O’Toole. Welch then found junior Aiden Whetstone for a 2-point conversion. O’Toole kept the drive alive with an over-the-shoulder 27-yard catch on third-and-13.

The Raiders made it a one-possession game on a 1-yard TD keeper by Oviatt early in the fourth quarter. The Bulldogs thought they had recovered a fumble by tailback Jace Hodges three plays prior at the Ark City 2, but the officials whistled the play dead.

“I think the biggest thing we did was making plays when we needed to,” Wiemers said. “There are always 4-5 plays in a football game that decide your fate in the W/L column and we made most of those. I don’t think we played perfect by any means, and still have plenty of room to improve. This group of kids have a lot of guts and are very competitive. They understand the magnitude of certain situations and when to bow up and make plays.”

Welch finished 16-of-23 passing for 226 yards, with one interception. The pick was a killer at the time, because the Bulldogs had marched down to the Wamego 7-yard line to set up first-and-goal with 14.6 seconds left before halftime. Welch scrambled to his right and threw the ball into traffic, where Wamego defensive back Isaak Meyer caught it in the end zone to snuff out the threat.

Sophomore tailback Wyatt Bahm was held to 39 yards on 11 carries, but the Bulldogs were 6 of 10 on third-down conversions and converted their only fourth down on the fake field goal.

Oviatt finished with 131 yards on 27 carries, and completed 13 of 23 for 118 yards, throwing an interception near the end of the third quarter that O’Toole returned 33 yards before a penalty wiped out some of the yardage.

Ark City now travels to McPherson to face the 4A No. 2-ranked Bullpups (10-1) for the chance to play for the 4A State title. McPherson escaped Friday night with a 28-21 victory against arch rival Buhler.

The winner of Friday’s game plays at 1 p.m. Nov. 27 against the winner between St. James (6-4) and six-time defending State champion Bishop Miege (5-4).

The 4A championship game was moved from Nov. 28 at Hummer Park in Topeka to the day after Thanksgiving at Gowans Stadium in Hutchinson due to lockdown rules from COVID-19 in Topeka.