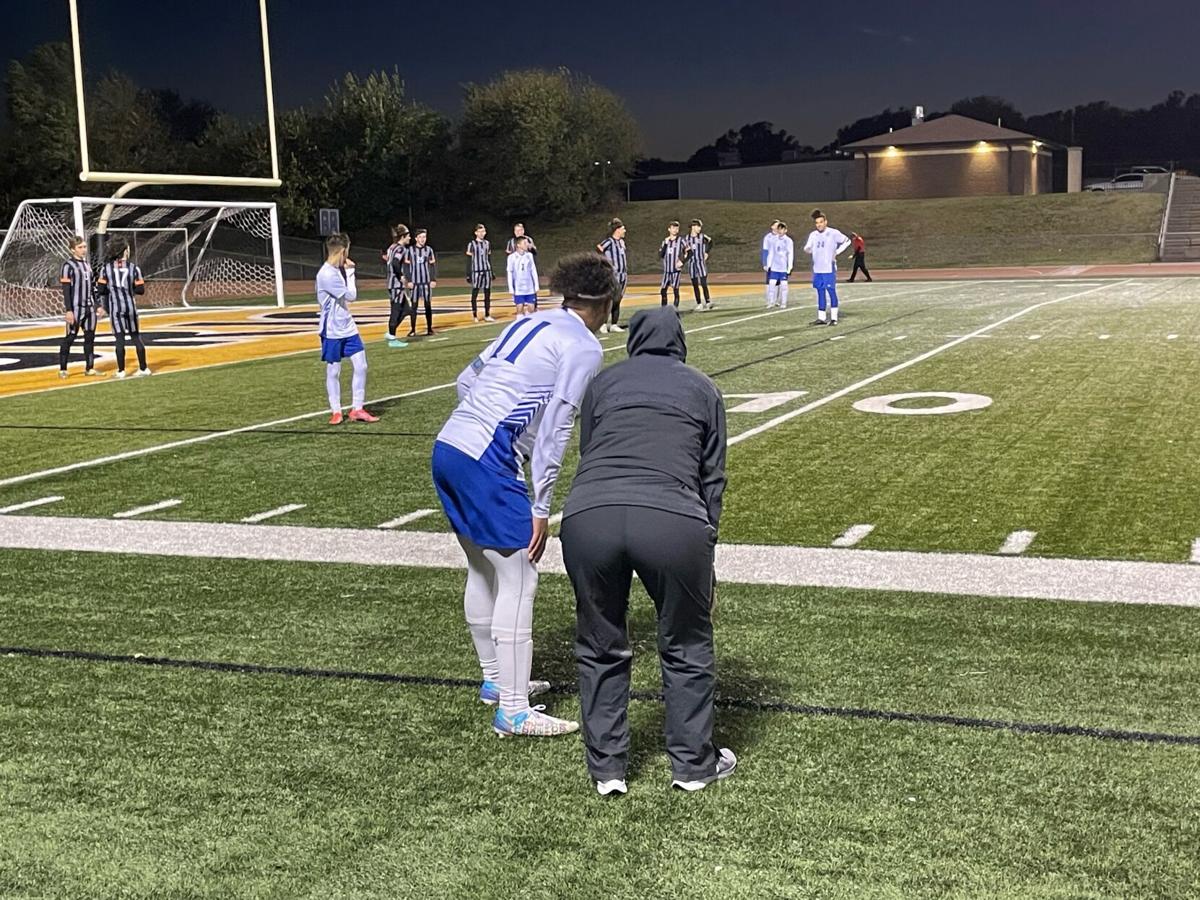 Kyan Towles consults with the coach Thursday on the sidelines of the Vikings’ playoff match against Augusta. The team lost 3-2 but finished the season 11-7 overall.

Kyan Towles consults with the coach Thursday on the sidelines of the Vikings’ playoff match against Augusta. The team lost 3-2 but finished the season 11-7 overall.

Fresh off an exciting first-round playoff win, the Winfield boys soccer team traveled Thursday to face a powerful Augusta team but came up a goal short, 3-2, to end a successful season.

Head coach Charles Osen said the team got off to a nice start with Kyan Towles scoring four minutes into the match. The Vikings were moving into 25-40 mph winds during the first half. Augusta, with the winds at their back, were in attack mode.

Towles goal silenced a charged up Augusta crowd. But the Orioles answered with an equalizer three minutes later. Toward the end of the half, Oriole Kaden Kearny netted two scores with 64 seconds to go up 3-1.

“If you are an Augusta fan, it looked like precision passing and execution,” Osen said. “From our side of it, we just got tentative and didn’t clear balls inside the 18-yard box like we needed to.”

Kearney seemed to win every ball in the air, Osen said, which is especially dangerous on corner kicks.

The Vikings gained some life in the second period when Drake Lowe scored off an assist from Zach Hammer with 13.25 left.

The clock eventually ran out off the Vikings, though, but they finished 11-7-0 to complete their first winning season since 2016. The squad started 2-4 and but went 9-3 after that. They were the second highest scoring team in class 4A with 88 goals for the season.

As Regional champs, Augusta (16-2) and will face Topeka Hayden on Tuesday.

“First thing I have to say is hats off to Dusty Buell and the Augusta Orioles,” Osen said “What a season they are having. So well instructed on how to execute a game plan. They have some terrific players. But we did not go into this game scared at all. We got off to a great start, and we just couldn’t get balls cleared when we needed to.”

The Vikings fell to the Orioles on Oct. 7 by the same score. “We were so close, but just couldn’t get over the hump against them,” Osen said.

Augusta also did a good job crowding Zach Hammar in the mid field and Kyan Towles at the striker position, as expected, the coach added.

“I thought we did a great job of fighting through adversity. When you play great teams like we did tonight, you hope to maybe get a call here or there, and it just didn’t happen,” Osen said.

He said the team did not blame the loss soon the match ups, the 110-minute game two days earlier, nor some calls that did not go the Vikings way.

But he’d love to have five more minutes on the pitch.

“Tough to say goodbye to eight seniors and five foreign exchange students,” he said. “This team improved so much … And the thing that was so much fun with this team is you never felt like you were out of any game.”